Private equity giant Carlyle Group is replacing its chief executive Kewsong Lee, who will leave the New York and Washington-based group just two years after he was appointed in July 2020.

The exit throws the $376bn group’s leadership into renewed upheaval as it navigates a more challenging investment environment, with volatile markets and a pullback in commitments from institutional investors.

Lee’s exit, announced on Sunday evening, came as his contract negotiations with Carlyle reached an impasse. Lee, who was named co-chief executive in 2017 alongside Glenn Youngkin, was given a five-year contract that expired at the end of the year.

Instead of continuing to negotiate, Carlyle said its board of directors had decided not to renew Lee’s contract. After it informed Lee of the decision, he decided to step down immediately.

“Both the company’s board of directors and Mr Lee mutually agreed as part of their discussions that the timing is right to initiate a search for a new CEO,” said Carlyle in a press release.

Unlike competitors such as KKR, Carlyle has struggled to identify its next generation of leadership. Lee served as co-chief executive alongside Youngkin, a split role that was supposed to resemble the joint leadership of Conway and Rubenstein during the firm’s ascent into a publicly listed industry giant.

However, Youngkin decided to retire at the end of 2020 after friction grew with Lee, plunging Carlyle’s succession plan into turmoil.

Lee took over sole leadership of Carlyle as it recovered from the shock of the coronavirus pandemic, which had caused the firm to record steep losses as performance flagged in many of its investment funds.

Under Lee, Carlyle’s business rebounded as he plotted the firm’s expansion in credit and insurance-related investments under new handpicked leadership. Lee also set a target of raising $130bn in new money by 2024, with much of the fundraising focused away from Carlyle’s traditional corporate buyout business.

In second-quarter earnings released in late July, Carlyle had made it more than halfway to Lee’s target, which he insisted the firm would hit. However, fundraising in the firm’s buyout unit has slowed. In the second quarter, its new flagship fund raised just $2.2bn.

At the same time, Carlyle expanded quickly elsewhere, striking a partnership with insurer Fortitude Re that brought in $48bn in new assets last quarter. 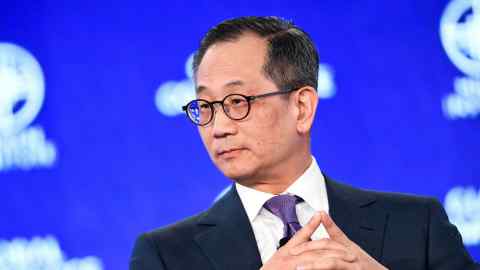 In an interview with the Financial Times in late July, Lee emphasised Carlyle’s diversification from private equity buyouts, in which the firm first made its name under Conway and Rubenstein.

“The largest share of our fee-earning assets under management is now associated with global credit,” said Lee, brushing off fundraising challenges in Carlyle’s eighth flagship buyout fund as “old news”.

“It’s a very different firm than just a few years back,” he said. “We have been deliberately diversifying our business.”

Co-founder Conway, who for decades oversaw Carlyle’s private equity investments, will become its interim leader as the group searches for a new chief executive.

Conway said he was “grateful” to Lee for his efforts to “position Carlyle for the future”.

Lee said he was “thankful for the opportunity to build the firm with an incredibly talented and committed team”.

No One Should Be Buying Single-Stock ETFs