Wealthier UK investors have suffered greater losses than smaller traders since the beginning of the year, as market turbulence struck down the riskier portfolios typically favoured by those with higher levels of investment.

Interactive Investor, which has roughly a one-fifth share of the UK’s self-directed investment market, said on Monday that customers with more than £1mn invested lost 4.2 per cent in the first three months of 2022, more than the 3.6 per cent loss for the average account holder.

The losses for private investors, compounded by the rising cost of living, has prompted signs that savers are retreating from the markets, with little prospect of better conditions ahead.

“The combination of higher inflation and slower growth could lead to, dare I say it, stagflation,” said Alex Funk, chief investment officer at Schroder Investment Solutions. “That could be quite difficult for most asset classes.”

Funk said Russia’s invasion of Ukraine had compounded tricky market conditions, as inflation stayed higher than central banks had anticipated. “Because severe inflation hasn’t been around since the 1970s, I don’t think people quite understand how markets react to high inflation,” he said.

This hit to investors came as global stock and bond markets, which normally move in opposite directions and provide balance to portfolios, suffered one of their worst joint declines on record in the first quarter, leading professional money managers to warn that markets left “nowhere to hide”.

Investment funds had notched up a record year of inflows from retail savings in 2021, but the torrent of bad news sent investors into reverse in January. Savers and their advisers pulled £3.68bn out of funds in January and February, according to the most recent figures available from the Investment Association.

Data from funds network Calastone, which tracks both retail and institutional investors’ movements, suggest the selling of funds continued into March.

Those with money in savings became more wary about entering the market. Hargreaves Lansdown, the investment platform, said that roughly one-third of investors who deposited into a stocks and shares Isa this year kept money in cash rather than investing it, compared with one-quarter of savers who hoarded cash in the two previous years. 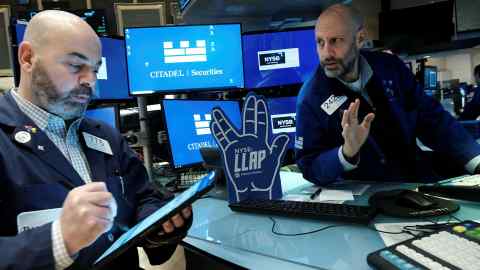 “Investors are reticent to take the plunge with their Isa,” said Emma Wall, head of investment analysis and research at Hargreaves Lansdown.

But she added that people should not wait for the perfect moment before investing: “Investors should be mindful that timing the market perfectly is near impossible . . . so waiting for total certainty can mean missing out on gains.”

Other investors have cut back on their regular investment habits because of pressure on their budgets. A poll by Interactive Investor found one-quarter of respondents had stopped paying into their investments or savings pots because of the cost of living.

“It’s understandable given the current outlook for household budgets — as well as the knowledge that things will most likely get worse before they get better, that people are looking to make cutbacks wherever they can,” said Becky O’Connor, head of pensions and savings at Interactive Investor.

“Future financial security is important and in cutting back on things like pension contributions now, people may be storing up difficulties for the future,” she said.

During times of volatility, emotional decision-making will be your biggest enemy

Unusually, the first three months of trading delivered sharper losses for wealthy investors compared with those with smaller pots.

Richer investors are generally able to take on more risk in their portfolios, which left them with greater gains during the run-up in markets in 2021. Those fortunes reversed this year, with particularly sharp losses for those who invested heavily in high-growth tech shares.

The rough patch for growth stocks inflicted short-term knocks to the performance of two of the UK’s best-loved investment vehicles, despite their impressive record in recent years. Terry Smith’s Fundsmith fund has tumbled 10 per cent this year, according to Morningstar data, while shares in Scottish Mortgage Investment Trust are down about 25 per cent.

Funk said the short-term hit to growth stocks was a reminder to diversify across different investing styles, keeping a balance between different approaches like growth and value. “Never bet the farm on one style because timing those factors can be very difficult,” he said.

Despite the rocky run for many investments, Funk advised investors against “knee-jerk” reactions. “During times of volatility, emotional decision-making will be your biggest enemy,” he said.

Vanguard’s special ETF patent expires next year. Does it matter?