China unveiled a growth target of about 5.5 per cent, its lowest in three decades, as Beijing seeks to buttress its economy after a sharp loss of momentum last year and fallout from Russia’s invasion of Ukraine.

The latest target reflects expectations of lower growth compared with pre-pandemic rates as Beijing retains measures to constrain the spread of coronavirus, enforces its “common prosperity” policy, pushes to reduce inequality, boosts the Communist party’s control over business and contends with a debt-fuelled real estate crisis.

The new target, announced by Premier Li Keqiang as part of a work report at the opening of the National People’s Congress, China’s annual meeting of its rubber stamp parliament in Beijing, follows on from year-on-year growth of just 4 per cent in the fourth quarter of 2021.

Last year, China targeted gross domestic product growth of more than 6 per cent and recorded 8.1 per cent, owing to the weak performance in 2020 when much of the country was under lockdown for months during the pandemic.

The Chinese economy has outperformed much of Asia in recovering from the pandemic but Li’s announcement marked the first time since 1991 that the GDP target was set below 6 per cent.

China also committed to a fiscal deficit of 2.8 per cent of GDP, slightly down from a year earlier.

The world’s second-biggest economy bounced back from the early impact of the pandemic, supported by its industrial engine and strong exports. But it struggled to maintain that momentum through 2021. The property sector came under severe distress and consumer spending remained weak.

In January, the People’s Bank of China cut a crucial lending rate for the first time since early 2020, adding to other rate reductions that together signalled the emergence of easier monetary policy against the backdrop of weaker growth. 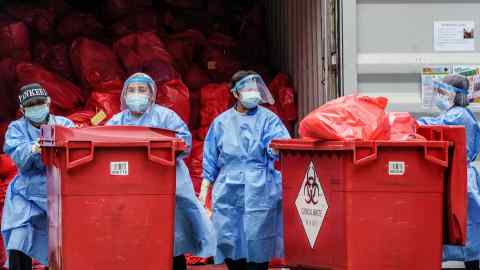 “Counter-cyclical policy can only do so much. What’s needed is more structural economic reform and a lower target will provide that breathing space,” said Ben Simpfendorfer, a partner at consultancy Oliver Wyman in Hong Kong.

Larry Hu, chief China economist at Macquarie, said in a report ahead of Saturday’s announcement that a “new easing cycle” was under way in China following regulatory tightening last year. He added that policymakers would “do whatever it takes” this year to achieve 5 per cent growth.

China’s property sector accounts for about a third of economic activity but construction fell last year as big developers, including Evergrande, defaulted. Analysts predicted a further easing of restrictions on local governments, including on home prices and mortgage lending ahead of Saturday’s meeting to manage the fallout.

China did not set a growth target in 2020 as its economy underwent a historic contraction in the early stages of the coronavirus pandemic. It grew 2.3 per cent over the full year, which was subsequently revised down to 2.2 per cent.

Video Shows Inside of Ukrainian Power Plant Captured by Russia

Mat Ishbia on what makes the difference in a difficult mortgage…