‘I’m old, not an idiot’: the elderly are ill-served online


Carlos San Juan, a septuagenarian Spaniard, has just pulled off an extraordinary coup. Two months ago he launched a petition to encourage banks to stop excluding older customers by closing branches and pushing vital transactions online.

The Change.org campaign attracted nearly 650,000 signatures with a memorable slogan: “Soy mayor, NO idiota” — I’m old, NOT an idiot.

San Juan’s success is a clanging alarm bell for any large institution, in finance and elsewhere, that thinks a cheap new app is a miracle cure for its customer service woes or burdensome overheads.

Having spent part of the past few weeks wrestling with log-ins, downloads, online security and sundry web services on behalf of elderly relatives, I share San Juan’s frustration. Older customers are suffering because of organisations’ failure of empathy, failure of inclusiveness and, above all, failure of customer strategy.

When I vented on Twitter that an app was not the easy fix companies believe, my complaints resonated with hundreds of users. Several admitted they had had to impersonate their parents to complete basic transactions online or to fool unhelpful call centres. “I found lying flat on my back, with head leaning as far forward as possible, was the best way of adding 40 years to my voice,” confessed one. 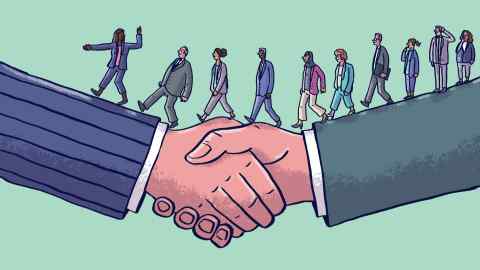 Clearly, acting for people with dementia brings its own difficulties. But the overall problem is more akin to the “comorbidity” challenge that makes geriatric medical care so tricky.

The senior citizens I’ve been helping are not all suffering from cognitive disabilities. They are not digitally or financially illiterate and are often equipped with tablets and smartphones. Yet they have a cross-cutting combination of conditions that can turn what app designers and customer service departments consider simple steps into unusable labyrinths.

A tech-loving 80-something relative with an iPad understands and uses apps and online banking. She would prefer not to have to make exhausting visits to her bank, as she did recently when she had to show she could not sign a document because of an advancing physical disability. Yet the same condition is also starting to complicate online transactions and making her worry how she will prove her identity without hard-copy bank statements and utility bills.

Another relative, a tech-averse 90-year-old, actively prefers to use the landline phone and post and, when necessary, to visit his local bank branch where a sympathetic manager recognises his needs. But what happens if she is promoted elsewhere or the bank decides to close the branch? Separately, to gain access to the online service offered by his health insurer I had to scan a QR code, retrieve a back-up mobile phone code, and recover a password. Secure in theory, but, without my help, daunting and impassable in practice.

Helping older people “go digital” solves only one part of the issue. As Joel Lewis, policy manager at charity Age UK points out, financial institutions advertise they will be there for our life journey and then move the goalposts with “upgrades” to technology that snatch away the control older users thought they had achieved.

Older customers are suffering because of organisations’ failure of empathy, failure of inclusiveness, and, above all, failure of customer strategy

Sam Richardson, a customer engagement consultant with Twilio, the cloud communications platform, says designers of new online services focus on mainstream users. She has heard some dismiss old people at other companies as “outliers”, “laggards” or “fringe” cases.

Some fringe: the OECD forecasts that, on average, over-65s will account for more than a fifth of its member countries’ citizens by 2028 and the percentage will continue to rise. In many countries, over-65s already make up well over 20 per cent of the population. That is before counting other vulnerable users who might face similar problems with an entirely digital interface, or poorer people unable even to afford the necessary technology to participate.

Here is where businesses are showing a lack of strategic foresight. The plan that San Juan has wrung from Spanish banks hints at what should be done. It includes a promise that branches will prioritise personal attention to older users between certain hours, make special phone lines available for them, guarantee accessible digital tools and improve training for staff.

That is a baseline. But clever businesses will seize an opportunity to build on it and earn a reputation for providing the best choice, digital and analogue, for older customers. They should think of it as an investment in a growing market. After all, we will all be “idiots” one day.

‘Tuesday Is A Yes-Or-No Moment’

Hard lessons from the crypto crash