Last year, The Pensions Ombudsman (TPO) noted an increase in complaints from workers over non-payment of workplace pension contributions by employers, which it said could be due to financial turbulence as a result of the Covid-19 pandemic.

Official figures disclosed by TPO to the Financial Times revealed complaints about unpaid workplace pension contributions rose to 686 in the 2021-22 financial year, compared with 539 the year before, an increase of nearly 30 per cent.

While the number of complaints may seem insignificant against a background of 1.4mn employers involved in workplace pensions, experts say the figures shine an uncomfortable light on vulnerable spots in the regulatory system open to exploitation by irresponsible or desperate employers.

With inflation and a slowing economy adding to pressures on businesses, the temptation to save costs by cutting pensions contributions may grow, they warn.

“It’s vital that everyone can build up enough savings for their retirement,” says Caroline Abrahams, charity director at Age UK, the charity for older people. “The increase in employers who are failing to meet their payments is concerning.”

The FT examines why the rise in complaints is prompting concerns — and what could be done to ease workers’ pension worries.

In 2012 the government acted to boost pension savings by requiring employers to automatically enrol eligible staff into a workplace pension and make contributions of at least 3 per cent of an employee’s pensionable salary. The employee must also contribute so the minimum paid in to their retirement account totals 8 per cent.

Under automatic enrolment, employers are typically responsible for deducting employees’ pension contributions from their pay and handing these, with their own contribution, to the pension provider by a set date.

Discovering that contributions have not been paid can be a shock for those who do not keep a close eye on their pension accounts and trust their employer to do the right thing. 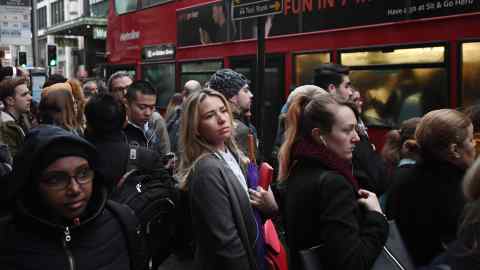 “There is a mindset that we get an annual statement through the post, which gets put into the folder and isn’t read because it’s written in gobbledegook,” says Holly Mackay, chief executive of Boring Money, a financial website for consumers. “We’re a long way off people checking in more frequently.”

The sector is overseen by The Pensions Regulator (TPR), which regulates workplace pension schemes and has powers to impose penalties on errant employers.

Alongside it sits the ombudsman, an independent organisation set up to settle disputes between savers and their scheme or employer over workplace and personal pension issues. Both have come under pressure as the auto-enrolment reforms have swollen pension participation from 9.3mn in 2012 to more than 20mn today, according to figures from the Office for National Statistics.

The supervision of contributions is the responsibility of pension providers and the trustees of every pension fund. Under legislation, providers are required to report to the regulator any contributions still outstanding after 90 days.

Providers also alert scheme members, who can inform the regulator if they have concerns. The regulator has a range of tools to deal with unpaid contributions, from fixed penalties of £400 to escalating daily fines of between £50 and £10,000 for employers stubbornly refusing to comply.

The regulator can chase the worst offenders through the courts, and name and shame them on its website, albeit this information is not easy to locate. Recent unpaid fines include £24,000 for a recycling company and £15,400 for a London pub. Where serious fraud is suspected, those involved can face criminal proceedings.

In the six months to June 2022 the regulator issued 13,604 notices to employers for unpaid contributions, compared with 13,376 in the previous six months. In the first half of 2022, just over 5,900 escalating penalties were issued to employers not responding to earlier enforcement action.

Nest, one of the largest workplace pension schemes, said it had noted a “slight” increase in missed payment notifications it issued to TPR over the past two years, but this may be explained by its growing size.

Pressure on its resources means the regulator has to decide where to apply its muscle.

Asked to comment on whether it investigated each report of unpaid contributions, TPR says it takes “a risk-based approach to assess the appropriate response and intervention, taking into account the value of missing contributions, both individually and in relation to the size of employer, and the number of staff impacted”.

Legal experts said in practice this may mean members of small pension schemes, in dispute over modest amounts with an employer, may be less protected.

“They’re not going to come out and expressly say we’ve only got finite resources, we’ve got to decide where to focus our attention,” says Charles Magoffin, partner at law firm Freshfields Bruckhaus Deringer.

“The regulator is indicating that it is having to triage [the cases it investigates] and that essentially means not giving time, I think, to a larger number of what they see as low materiality claims.”

He adds: “It feels fundamentally wrong that some [people] are being forced to take matters into their own hands by going to the ombudsman.”

Baroness Ros Altmann, a former pensions minister, said: “The process seems to be that the regulator relies on the schemes to report missing contributions first and flag that to TPR. If the scheme does not do this, how will TPR know the contributions are missing?”

TPR said it engaged with and monitored schemes to ensure they met their duties.

Ombudsman under the microscope

Individuals can also lodge a complaint with the ombudsman if they have concerns about unpaid contributions, no matter the value.

This process is free for the applicant. As well as directing contributions to be paid, the ombudsman can award compensation for stress and inconvenience. Decisions are binding on employers but, importantly, the ombudsman does not have power to enforce its determinations directly.

“Once a determination is made it is down to the applicant to ensure enforcement through the courts, if necessary,” says The Pensions Ombudsman.

It adds it is “generally rare” for one of its determinations not to be complied with but it does not monitor compliance as this would not be an “efficient use” of resources.

Published determinations by the ombudsman have involved decisions against small employers including local pubs, production companies, food outlets and others. Some companies had even failed to engage with communications from the ombudsman’s office during investigations.

Cases have been taking more than a year to resolve due to a backlog which grew during the height of the pandemic, though the ombudsman said it was now taking action to bring down waiting times.

In its defence, The Pensions Regulator says it assesses several thousand new reports of missing contributions every month and uses its powers in a “consistent and proportionate” way to protect savers, “regardless of the size of their employer”. It carries out inspections of employers across the UK.

Between April and the end of 2022, the regulator recovered £3mn in fines relating to unpaid contributions, with £500mn paid into schemes since 2012, as a result of its enforcement activity. The bulk of fines, or 97 per cent, levied by TPR are against small employers, who make up the majority of employers covered by automatic enrolment duties.

“This is as a direct result of our work to remind employers of their duties through regular and effective communications, backed by an effective compliance and enforcement regime.”

“We will not hesitate to intervene if we are made aware of unresolved concerns, and we will go to court when appropriate to ensure employers pay fines issued against them.”

“This increase in complaints about unpaid employer pensions contributions is concerning,” says Sam Richardson, deputy editor of Which?, the consumer group.

“If some rogue employers believe they can get away with breaking the law on contributions the regulator may need to consider whether it could take tougher action to send a clear message and avoid employees missing out on vital contributions.”

Matt Rodda, Labour MP and shadow pension minister, told the FT a future Labour government would “ensure that the system is working properly and that the minority of employers who break the rules are held to account”.

The Department for Work and Pensions said: “We will continue to work closely with the regulator to ensure employers comply with their duties and the automatic enrolment framework continues to operate successfully, ensuring members’ interests are protected.”

Cases determined by the ombudsman

Decisions published by The Pensions Ombudsman show some employers fail to pay contributions over several years, leaving workers to chase justice themselves.

One worker complained his employer, a local pub, had not paid £2,093 in pension contributions despite making deductions of between £50-£90 from his monthly pay for 20 months between December 2019 and June 2021.

In December 2021, he complained to the ombudsman.

According to the determination, the scheme reported the employer to the regulator a year earlier in November 2020.

In December 2022, TPO ruled in the man’s favour and directed the employer to make good the unpaid contributions. It awarded him £1,000 in compensation for “serious distress and inconvenience”.

A woman was concerned about £200 in unpaid contributions despite having pension deductions from her monthly salary over 18 months. In November 2019, she complained to the ombudsman.

In October 2022, three years later, the ombudsman ordered the employer to make good the missing contributions and pay her £1,000 for serious distress and inconvenience.

The employer did not respond to the ombudsman’s communications during its investigation.

Hot air, cold climate: why CEO activism at Davos may have peaked