The US commerce department on Friday said it has found Chinese solar manufacturers have been avoiding tariffs by assembling panels for export to America in south-east Asia.

The preliminary findings are the result of a long-running probe into China’s dominance over the solar industry’s supply chain.

It comes as a blow to US solar installers as it raises the prospect of potential disruptions and more costly imports from a region the sector relies on for about 80 per cent of its supplies. American parts manufacturers welcomed the result.

Abigail Ross Hopper, head of the Solar Energy Industries Association, called the decision “disappointing” and said it would “strand billions of dollars’ worth of American clean energy investments”.

The commerce department found Chinese companies operating in Vietnam, Thailand, Cambodia and Malaysia were evading tariffs by exporting solar products from China to be assembled and exported from the region to the US. The findings are preliminary and a final ruling will be released in May, the department said.

The investigation found that BYD Hong Kong in Cambodia, Canadian Solar and Trina in Thailand and Vina Solar in Vietnam were circumventing the tariffs. None of the companies affected immediately responded to requests for comment.

The findings mean exports from the south-east Asian countries will be subject to import tariffs, which solar installers say will raise their costs and threaten the climate goals of the administration of president Joe Biden. The commerce department said companies could avoid these costs by certifying that their operations are not bypassing the tariffs on Chinese solar panels.

The case underlines the tensions at the heart of the Biden administration’s push to protect US industry and jobs while also driving a rapid buildout of clean energy.

US solar developers have insisted there is not enough of a domestic supply chain to buy parts locally and accused the president of pursuing a “dysfunctional” climate policy.

The case was brought by Auxin Solar, a California-based panel manufacturer, which argued Chinese suppliers were guilty of “pervasive backdoor dumping” that was hurting US manufacturers.

The tariffs will not take effect immediately, however. In June, Biden issued an executive order that postponed any new tariffs on imports from the countries for two years after the solar industry warned the trade dispute was snarling the sector’s supply chain.

The industry has blamed the tariff fight for disrupting panel supplies and causing a sharp drop in new installations compared to last year. 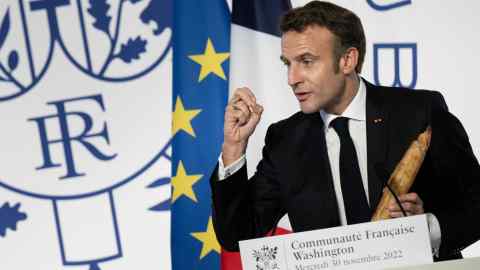 But Michael Stumo, chief executive of Coalition for a Prosperous America, which backs solar manufacturers, said Biden should impose the tariffs immediately, calling it “unconscionable that the White House wants to continue to give Chinese manufacturers a pass for illegally violating US trade law”.

The recently passed Inflation Reduction Act includes billions of dollars in federal subsidies for companies to establish solar manufacturing in the US, which the Biden administration hopes will break China’s dominance over the global solar supply chain.

But Hopper of the SEIA said it would take time to build domestic solar manufacturing and that tariffs would hurt the industry in the meantime.

“Two years is simply not enough time to establish manufacturing supply chains that will meet US solar demand . . . This is a mistake we will have to deal with for the next several years.”

The corporate backlash against net zero