The US has warned European countries that a conflict over Taiwan would trigger a huge global economic shock, in an effort to step up contingency planning amid rising concern about military action in the Indo-Pacific.

The state department has shared research with partners and allies that estimates that a Chinese blockade of Taiwan would spark $2.5tn in annual economic losses, according to six people familiar with the material, which was commissioned from the research firm Rhodium Group.

The stark warning has been shared with European Commission and European government officials, as the US and partners begin to think about how they could use sanctions against China over any military action against Taiwan. Washington is using the report to stress to European countries that a Taiwan conflict would have significant implications for them.

Two officials said the US and EU had begun talks about how to prepare for a possible conflict over Taiwan. The Financial Times earlier this year reported that the US had held contingency planning talks with the UK for the first time.

Two people familiar with the US-EU discussions said some officials believed that preparing contingency plans, and communicating them publicly, could become part of a strategy to deter China.

Some US and European officials believe the spectre of huge global economic damage from a Taiwan conflict is necessary to rally international support for deterring China. The US has also used the example of the Russian invasion of Ukraine to stress the need to consider contingencies.

The sharing of the Rhodium research comes as senior US officials and military officers have increasingly talked about the threat to Taiwan. Secretary of state Antony Blinken has said twice in the past month that the US believed China had moved up its timeline for “reunification” with Taiwan.

Joe Biden and Xi Jinping are expected to discuss Taiwan when the US and Chinese presidents hold their first in-person meeting as leaders in Bali on Monday on the sidelines of the G20 summit. Over the past year, Biden has said on four occasions the US would defend Taiwan from an unprovoked Chinese attack.

The state department declined to comment on the report. A spokesperson said the US had “an abiding interest in peace and stability across the Taiwan Strait, which is an issue of international concern”. He said it would support Taiwan “in line with our longstanding one China policy” — under which the US recognises Beijing as the sole government of China and acknowledges, without endorsing, the position that Taiwan is part of China.

One senior EU official compared the sharing of the report with the US move last year to distribute intelligence on Russia’s military build-up around Ukraine, when some EU capitals were dismissive of the idea that Vladimir Putin would invade. “We learned a lesson with that,” the official added.

Daniel Rosen, a partner at Rhodium who leads the group’s China practice, declined to comment on whether the consultancy had produced a report for the state department. But he said Rhodium had done work on Taiwan-related economic scenarios for years and would publish a public note soon. 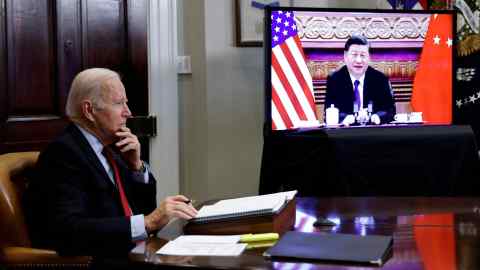 The report said Taiwan would suffer the biggest hit but the economic blow to China would also be immense, and that the fallout would reverberate throughout the global economy. It said south-east Asia — a region where many countries want to avoid taking sides and argue that a China-Taiwan conflict has nothing to do with them — would see heavy economic damage.

In terms of industries, supply chains dependent on semiconductors led by the automobile, server and PC and cell phone sectors would suffer the biggest disruption, the report forecasts. The US has become increasingly concerned over the past few years about its reliance on Taiwan for chips.

The report warns that trade finance for Chinese companies would dry up the moment Beijing crossed the line to conflict over Taiwan, dealing a severe shock to global trade. It also said that due to the importance of China as an economic partner for developing countries, such a shock could push more than a dozen emerging markets into economic crisis.

Bankman-Fried invested in venture capital backers of his FTX exchange