The giant BT pension fund took an £11bn hit as its investments were shaken by market turmoil triggered by the government’s “mini” Budget.

The former monopoly’s defined benefit pension scheme, one of the largest in the country, revealed on Tuesday that “significant market volatility in the second half of September” caused the scheme’s assets to fall by around £11bn between September 23 and 28.

At the end of June, BTPS’s net assets stood at £47bn, suggesting they fell by more than a fifth to £36bn. BT Group did not have to provide any cash to cover the fall in value of the scheme’s assets.

“Whilst the value of the scheme’s assets has fallen over this period, there has been no worsening in our estimated funding position,” said BTPS’s chief executive Morten Nilsson, in a statement accompanying the annual report on Tuesday.

BT was one of thousands of pension schemes across the UK that used liability-driven investment (LDI) strategies to protect the plan’s finances against adverse movements in interest rates and inflation.

The government’s announcement of £45bn in unfunded tax cuts made investors recoil from the UK’s sovereign debt, causing gilt yields to soar. The BoE then swooped in on September 28 by announcing it would buy up to £65bn of gilts to stem the sell-off.

Rising gilt yields lead to falls in scheme liabilities. However, schemes that hedged against interest rate risk using gilts or derivatives will also have seen their gilt asset values fall, under this approach.

The drop in assets followed a year in which the scheme’s assets had already fallen by £10.4bn, which BTPS attributed to “the performance of our liability hedging investments”, corresponding to an earlier rise in gilt yields. 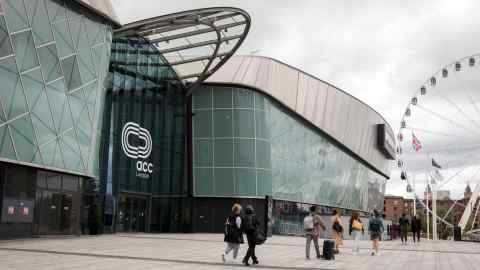 Following the year-end, there was another significant fall in the value of the scheme’s assets, during a period of significant market volatility in the second half of September, BTPS said.

“Prior to the Bank of England’s gilt market intervention, there was an estimated £11bn fall in the value of the scheme’s assets,” said BTPS. “Our hedges have continued to perform as expected, and up to the date of signing there has been no worsening in our estimated funding position.”

The scheme’s hedges contributed to a significant reduction in the scheme’s funding deficit, which has fallen from £8bn in 2020 to £4.4bn this year.

“Today’s statement provides comfort that hedging strategies are functioning as intended and that the scheme remains comfortable with its funding strategy,” wrote analysts at Jefferies.

BTPS operates its LDI scheme in-house, which it said helped it react quickly to market volatility.