All energy companies, including oil and gas producers, should pay into a multibillion pound fund to subsidise electricity and gas bills from April, when blanket UK government support ends, one of Britain’s biggest utilities has said.

ScottishPower chief executive Keith Anderson proposed the fund to ensure millions of households’ energy bills continue to be discounted after the spring, when they are on average set to top £4,000 a year.

Instead the government scheme — which caps the price per unit of electricity and gas that suppliers can charge and whose cost had been estimated at £150bn — will apply to all households only until April.

Beyond that, Hunt said funding would be reviewed with the aim of targeting it at “the most vulnerable”.

Anderson told the Financial Times the two-year protection for all households would have resulted in the Treasury writing an “open-ended blank cheque . . . that quite frankly the country can’t afford”.

He added that an energy company-backed fund, which would be part-funded by public money, could replace other “rushed” policies. These include a windfall tax on oil and gas producers introduced in May and the revenue cap on low-carbon electricity generators, which was confirmed by the government last week.

The tax has been widely attacked for enabling oil and gas companies to take advantage of a generous investment allowance and reduce their tax bills if they press ahead with new drilling projects.

Anderson said the cap meanwhile did not apply to “half of the [electricity] generation sector”, such as gas-fired power stations, which have been boosted by the sharp rise in wholesale power prices since Russia invaded Ukraine.

“There’s a need for all of us . . . oil and gas companies, upstream companies and every generator to sit in a room with the government and talk about how we contribute to [a] fund,” said Anderson. He added that the government should “pause, draw breath, stop running individual schemes” and consider how the energy sector “in its entirety” can help households.

He called for any fund to prioritise roughly 10mn of the most vulnerable Britons, and said energy groups and the Department for Work and Pensions would have to work together to identify people receiving universal credit and other benefits.

But energy companies are also keen to help middle-income households, which will struggle to pay their bills next year without help. Previous suggestions of how to do this include restricting the number of subsidised units of energy customers receive, as wealthier households tend to use more. 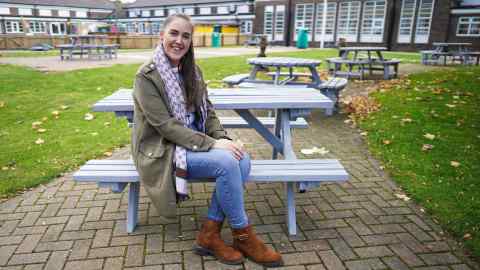 Separately, in a letter to business secretary Jacob Rees-Mogg on Friday, executives from energy companies including Centrica, Eon, EDF Energy and SSE expressed anger over clauses in the recently published energy prices bill, which they claimed would “unexpectedly” hand ministers “extensive new powers”.

The companies want clauses that would allow Rees-Mogg to intervene in the setting of Britain’s energy price cap to be removed from the legislation, whose main aim is to enable businesses to receive support with their energy bills this winter. Ofgem, the regulator, at present sets the level of the cap.

The bill would also give ministers sweeping powers to modify energy groups’ licences and issue emergency directions to the sector in the event of a crisis. Industry bosses said these clauses had “the potential to impact just about everything energy companies do on an indefinite basis”.

The UK business department said it “strongly” disagreed with the energy companies’ assessment of the bill, insisting that it “does not undermine regulation of the energy market”.