Retail investors are nursing steep losses this year, leading many to shun individual stocks in favour of funds that track the biggest high-tech companies on the Nasdaq in the hope of clawing back losses.

Personal portfolios in the US fell 44 per cent between early January and October 18, according to data compiled by JPMorgan Chase, in a reflection of the acute pressure applied to highly valued equities by rising interest rates and a darkening economic outlook.

The Federal Reserve has tightened monetary policy aggressively this year in a bid to tame inflation — lifting rates by an extra-large 0.75 percentage points at each of its past three meetings to a target range of 3 per cent to 3.25 per cent.

Higher borrowing costs lessen the appeal of more speculative companies for whom cash flows are often projected further into the future. The move by the Fed and its global peers to jack up rates has also intensified concerns about a protracted economic slowdown.

Wall Street’s S&P 500 has lost more than 20 per cent so far in 2022, and the technology-heavy Nasdaq Composite has tumbled almost 33 per cent over the same timeframe — knocking the indices into so-called bear market territory earlier this year.

Interactive Investor, which runs one of the UK’s largest platforms for self- directed investors, said its clients lost an average of 12 per cent since the start of the year.

Burnt by the sell-off, many retail investors have sold down shares in a bid to protect themselves from further pain. Investors this past week registered their longest weekly selling streak since the bank began measuring the market in 2016, JPMorgan noted.

The volume of selling has not yet reached the levels seen during the depths of the coronavirus pandemic in March 2020, with analysts suggesting investors are afraid of missing out on a market upswing.

“People have the memory of March 2020, and the rebound,” said Peng Cheng, a global quantitative and derivatives strategist at JPMorgan.

But he said they were buying products that tracked stock indices, such as exchange traded funds.

This past week, investors bought more than $330mn of Nasdaq 100 ETFs, which track companies including Apple, Microsoft and Tesla, more than the 12-month average.

“On one hand they’re selling stocks, but on the other, they’re getting exposure to the Nasdaq,” Cheng said.

In the UK, six of the top 10 most-bought funds in September on Interactive Investor were passive options from Vanguard, and for the first time in the five years the company has tracked the data, only one active manager ranked in the top 10.

Investors have also shifted nearly $140bn into money market mutual funds since the start of the year, low-yielding accounts that are able to offer returns generally in line with Federal Reserve interest rate rises, according to Investment Company Institute data. 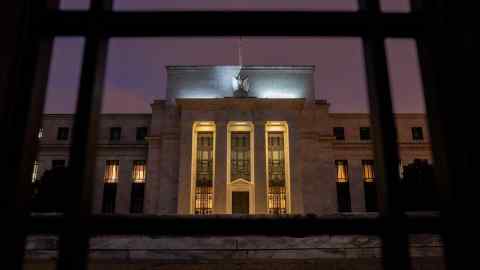 “If you’re getting 4 per cent yield on some of these products, it’s a no brainer for a retail trader who can’t make 4 per cent in the S&P,” said Viraj Patel, global strategist at Vanda Research. “In an uncertain time it’s a straightforward way to earn a return.”

“Retail has learned from those big losses year to date,” Torres said. “They’re parking money at high rates . . . and that’s what the Fed wants.”

Investing to beat the inflation monster