US antitrust warnings lead to corporate board resignations


Seven directors have resigned from corporate boards after the US Department of Justice warned they were violating antitrust laws as authorities toughen enforcement against anti-competitive conduct in US business.

Private equity executives are among the directors who have stepped down, marking the first fallout in the industry since Jonathan Kanter, head of the DoJ’s antitrust unit, pledged to crack down on the sector’s competition violations.

The seven executives left five boards in response to concerns raised by the DoJ about breaches of section 8 in the 1914 Clayton Antitrust Act, which prohibits “interlocking directorates”, where directors sit on boards of multiple, competing companies.

“Section 8 is an important, but underenforced, part of our antitrust laws,” Kanter said in a statement. “Competitors sharing officers or directors further concentrates power and creates the opportunity to exchange competitively sensitive information and facilitate co-ordination — all to the detriment of the economy and the American public.”

Among the executives who stepped down was one from the private equity firm Thoma Bravo who sat on the boards of two software groups, SolarWinds and Dynatrace. According to the DoJ, two other Thoma Bravo executives at SolarWinds, which the buyout firm bought in 2016 for $4.5bn with rival firm Silver Lake, also resigned from its board.

According to a Financial Times analysis of the boards of SolarWinds and Dynatrace, Thoma Bravo’s Seth Boro is still listed as a director on both boards, while the private equity firm’s James Lines and Michael Hoffmann are still listed on the board of SolarWinds.

The companies and directors “unwound the interlocks without admitting to liability”, the DoJ said.

The DoJ said this was the “first” in a wide-ranging assessment of “potentially unlawful interlocking directorates”. According to a client alert published in September by law firm Wilson Sonsini, the department had sent letters to “multiple” investors, public companies and individuals saying it may sue them over such violations.

A senior DoJ official said the department was “pioneering a new category of antitrust enforcement”, adding that the directors’ resignations were similar to companies abandoning mergers when faced with a potential DoJ lawsuit.

Private equity has moved into the spotlight of US antitrust enforcers and regulators since president Joe Biden appointed a new generation of watchdogs with a mandate to bolster existing competition rules.

Kanter told the Financial Times earlier this year that his agency would take a tougher stance on buyout firms rolling up companies across sectors in an effort to become dominant players. The 49-year-old lawyer specified in his interview with the FT that the DoJ would enforce section 8 of the antitrust act.

Lina Khan, who was picked by Biden to lead the Federal Trade Commission, has also said she would take a more muscular approach against private equity as their businesses had “life and death consequences” for American citizens. 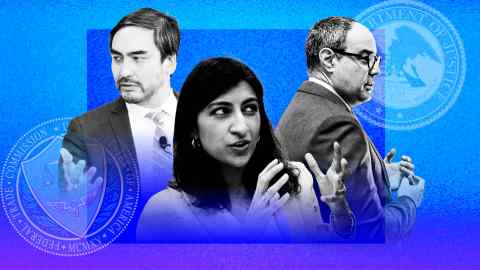 The focus on buyout firms is a result of the phenomenal growth of the these investment groups. Over the Past three decades, private equity groups have grown from being buyers of small- to medium-sized companies to the owners of companies that control large swaths of the US economy.

The top 10 private equity groups, which include Blackstone, Apollo and KKR, have more than $3tn in assets under management. Last year, buyout groups announced a record 14,730 deals globally worth $1.2tn, nearly double the previous all-time high set in 2007, according to Refinitiv data.