After suffering months of supply chain chaos, a dearth of drivers and surging fuel prices, Germany’s trucking industry is facing a new crisis: a chronic shortage of the liquid that keeps its vehicles on the road.

AdBlue, a mixture of urea and deionised water, is the lifeblood of logistics. But stocks are drying up after SKW Piesteritz, a company in the east German town of Wittenberg, which is one of Germany’s biggest sources of the solution, halted production to cope with the soaring price of gas.

Dirk Engelhardt, head of the BGL, a trade body for the haulage industry, said he was being besieged by anxious companies that were running out of AdBlue, which neutralises nitric oxide emissions from diesel engines.

“Lorries can’t move without it,” he said. “There is going to be such an outcry in the population if supply chains break down and supermarkets empty out.”

The German economy is heading for recession, burdened by its worst energy crisis since the second world war. Moscow’s decision to cut off gas supplies pushed prices to levels four times higher than a year ago — prompting some energy-intensive plants to halt operations even as the government held out the prospect of generous subsidies to bring down costs.

SKW Piesteritz became one of the most high-profile casualties of the surge in gas prices when it shut down completely in August. It later brought one of its two production lines back up to “minimum levels”, spokesman Christopher Profitlich said, but the second remains offline. “If we’d kept producing we would have been making losses of €100mn every month,” he said.

SKW’s shutdown has already had a huge impact on fertiliser stocks to German farms and has caused problems for abattoirs, food packers and breweries that rely on the carbon dioxide it produces — a byproduct of ammonia.

But the sharp fall-off in its production of AdBlue is predicted to have even bigger economic consequences.

Engelhardt said more than 90 per cent of Germany’s 800,000 trucks need the solution and consume a total of 2.5mn-5mn litres a day.

“We’re getting the first calls from hauliers who haven’t any AdBlue left and are not getting fresh supplies,” he said in late September. “This could soon reach proportions we can no longer contain.” Those still able to purchase AdBlue complain that prices for the solution are up to seven times higher than a year ago.

Supermarket chains, scarred by the shortages of staples seen during the coronavirus pandemic, are already expressing concern. A spokesperson for Aldi Süd, one of Germany’s largest discounters, said the company was “taking the current situation very seriously”.

“We are of course in close contact with our suppliers and are reacting to the latest developments,” she added.

It is not just trucks that rely on the solution. “This affects all vehicles on four wheels and weighing more than 3-4 tonnes,” said one haulage operator in the southern state of Bavaria. “What’ll happen to all the ambulances, fire engines and tractors that also run on diesel?” Transport firms are increasingly having to rely on expensive imports from a restricted group of producers.

SKW is not the only chemicals manufacturer that is scaling back production. Norwegian group Yara announced in August it would reduce the capacity of its European ammonia plants by 65 per cent. German chemicals giant BASF has cut ammonia production at its vast Ludwigshafen site in south-western Germany and is buying the compound on the world market instead.

The problems are affecting all industries that consume a lot of energy. Recent official data showed glass and ceramics production declined by 2.8 per cent between July and August, chemicals by 3.1 per cent, while coking plants and oil refineries saw output fall by 4.5 per cent. Toilet paper manufacturer Hakle filed for insolvency in September citing the increase in energy and commodity prices.

Nor is the situation expected to resolve quickly, despite the recent fall in gas prices from record highs over the summer. The IMF expects the German economy to shrink next year by 0.3 per cent — the worst performance of any large economy bar Russia. Markus Steilemann, head of chemicals lobby group VCI, recently warned that Germany risked turning from an “industrial country” to an “industrial museum”.

The government has sought to address the energy crisis with a €200bn package of measures designed to shield consumers — both private households and businesses — from higher fuel bills. 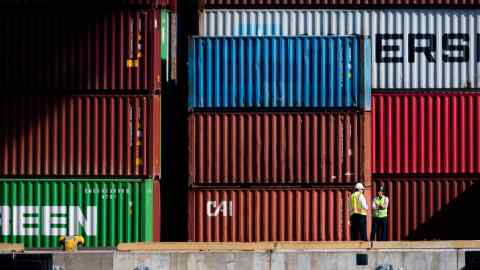 Berlin hopes the centrepiece of its package — a “gas price brake”, where prices for a basic volume of gas and electricity will be capped, with usage higher than that priced at market rates — will provide some respite.

But for energy-intensive plants such as SKW Piesteritz, the price of gas is still too high to justify a return to business as usual. “The price brake will only come into effect for industry in January, and that’s too late for us,” Profitlich said.