In one of the bleakest meetings of the IMF and World Bank since the financial crisis, Sri Mulyani Indrawati, Indonesia’s finance minister and chair of the Group of 20 leading economies, summed up the mood.

“The global economic situation has become more and more challenging,” she said in her closing remarks to the gathering of finance ministers and central bank governors in Washington, DC on Thursday. “The world is in a dangerous situation.”

Indrawati and others were full of talk of geopolitical disagreements, negative economic spillovers from one country to another, and the unintended side-effects flowing from the IMF’s message that countries should “stay the course” on fighting inflation by raising borrowing costs fast.

Kristalina Georgieva, managing director of the IMF, said the world was witnessing a transition from predictability, where interest rates and inflation were low, to instability.

“Shock upon shock upon shock,” she said, characterising the situation facing participants. “We have to really work on changing our mindset to be much more precautionary and be prepared for much more uncertainty.”

She pleaded with countries “to identify [the] problems and then muster the will to solve them”.

There was action on the former, at least.

Participants shared the IMF’s view that the global economy was in a tough spot – and that the worst was yet to come. Indeed, many thought the fund’s latest projections of growth of 2.7 per cent next year, downgraded substantially from estimates made during the spring, were still too optimistic. The world economy was heading toward a recession, which would be potentially amplified by financial instability of the sort witnessed during the week in the UK. Inflation would remain uncomfortably high into 2023 too, forcing central banks to keep tightening.

“We’re seeing developments and challenges that are either entirely new or are unlike anything that’s been around for at least decades,” said Nathan Sheets, chief economist at US bank Citi. “It is creating stresses and difficulties for policymakers as they devise approaches to be able to achieve their objectives, including inflation, macro stability and financial stability.”

A problem globally, almost everyone agreed, was the rapid rise in US interest rates. While the Federal Reserve had aimed to tame soaring domestic prices, the impact on the dollar’s strength was causing difficulties beyond US borders, driving up inflation elsewhere and raising the prospect of market volatility.

“What is necessary is a comprehensive understanding of the [cross-border] spillovers of policy,” said Mark Carney, former Bank of England governor.

However, the Fed is poised to extend its string of supersized interest rate increases for yet another meeting, after new data published on Thursday showed a worrying acceleration in underlying inflation. It next meets in early November. Economists now consider a fourth consecutive 0.75 percentage point rate rise — which would shift the federal funds rate to a new target range of 3.75 per cent to 4 per cent — a foregone conclusion. The Fed is also expected to keep interest rates at a level that actively restrains the economy for longer than initially expected.

Bringing inflation back down to central banks’ longstanding 2 per cent targets will take time, warned Marcelo Carvalho, BNP Paribas global head of economics, and prove hard to do.

The general view was that central banks, including the Fed, should continue raising interest rates. However, economists acknowledged that finding the right balance between containing price pressures and destroying demand was fraught with difficulty.

Policymakers must proceed with “a lot of hope and heart, because you really don’t know what is going to work”, Sheets said.

Some economists think that the action taken by policymakers so far has even been counter-productive. The measures used in combating high inflation, a slowing economy, an energy and food crisis and the lingering effects of Covid-19 have amplified volatility and economic difficulties, according to Mohamed El-Erian, chief economic adviser to Allianz. 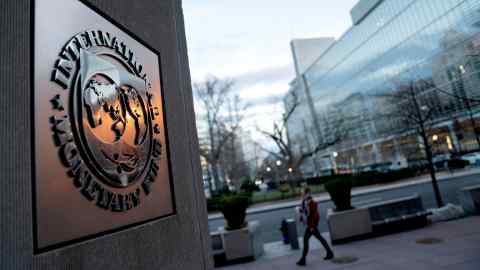 Nowhere did this view apply more than in the UK. The shambles that has followed the new government’s “mini” Budget has been the talk of Washington, cited universally as a perfect case study in what can happen if governments are not careful with the co-ordination of fiscal and monetary policy. On Thursday, Kwasi Kwarteng, the UK chancellor, flew home early from the meetings to hold emergency talks with prime minister Liz Truss.

The IMF had urged the UK to make modifications quickly. “Don’t prolong the pain,” Georgieva said, while her colleagues at the fund talked in various motoring metaphors about the situation in Britain. The government was flooring the accelerator while the BoE applied the brakes, IMF officials said. Alternatively, they said ministers were steering to the left while the central bank tugged the steering wheel to the right. In both formulations, they implied the UK economic vehicle was heading for a crash.

As ministers prepared to go home after the first in-person meetings since the pandemic started, many connections had been re-established and valuable discussions had been held. But with domestic problems plaguing most of the membership, the usual IMF calls for co-operation went unheeded.

Concrete results on global economic management were so thin on the ground that, when asked to name them, Indrawati struggled. One came to mind, however: economic leaders had been “recognising the challenging tasks [ahead] for both fiscal and monetary policy”, she said.

Why Isn’t My Apple Watch Pairing? 5 Ways to Fix It