Fed fearful of doing ‘too little’ to stamp out soaring inflation


Federal Reserve officials signalled they are more concerned about doing too little to rein in soaring US inflation than doing too much and doubled down on plans to tighten monetary policy so it constrains the economy, according to an account of their latest meeting.

Minutes from the September meeting — at which the Fed implemented its third-consecutive 0.75 percentage point rate rise — underscored the high bar for the central bank to back off in its historically aggressive campaign to bring prices under control.

According to the account, central bankers remain committed to “purposefully” tightening monetary policy in the face of “broad-based and unacceptably high inflation”.

The record of the meeting, released on Wednesday, comes just a day before a hotly anticipated inflation report, one of the last critical data points ahead of the Fed’s next rate decision in November and the midterm elections a few days later.

Intense and persistent inflation has dogged the US central bank and the Biden administration and ignited concerns that a sharp recession and significant job losses will be required to tackle price pressures.

Fed officials are debating whether a fourth 0.75 percentage point rate rise is necessary next month, which would lift the federal funds rate to a target range of 3.75 per cent to 4 per cent.

In remarks delivered later on Wednesday, Michelle Bowman, a Fed governor, indicated her support for additional large rate rises in the absence of evidence that price pressures are easing.

“If we do not see signs that inflation is moving down, my view continues to be that sizeable increases in the target range for the federal funds rate should remain on the table,” she said at an event hosted by Money Marketeers of New York University. “However, if inflation starts to decline, I believe a slower pace of rate increases would be appropriate.”

According to the Fed minutes, some officials warned that the longer inflation stays elevated, the higher the risk that expectations of future price pressures get out of control, leading to a damaging feedback loop. Several emphasised the need to maintain a restrictive stance “for as long as necessary”.

“They really want to emphasise the ‘higher for longer’ message and these minutes were really in line with that,” said Blerina Uruci, chief US economist at T Rowe Price. “The right thing to do right now is to focus on inflation and inflation expectations.”

However, the minutes of the gathering, which took place before the IMF and others warned of an increasingly bleak outlook for the global economy, showed policymakers were concerned about the “highly uncertain” international outlook.

Several participants stressed the need to “calibrate” the pace of further policy tightening with the aim of reducing the risk of “significant adverse effects on the economic outlook”.

Most participants noted that the impact of their policy actions has not shown up in the data, highlighting that a “sizeable portion of economic activity had yet to display much response”.

According to projections released in September, most of the Fed’s bank presidents and members of the board of governors project rates to rise to 4.4 per cent by the end of the year and eventually peak at 4.6 per cent in 2023.

A significant minority of officials endorsed a slightly less aggressive approach, however, suggesting many are open to the Fed stepping down to half-point increments as early as next month.

The Fed has come under international pressure to slow the pace of rate rises given the significant impact of its tightening campaign on the global economy and the ability of countries with weaker public finances to repay their debts.

The IMF this week warned that the “darkest hour” for the global economy lies ahead, both in terms of growth and financial stability. But it nonetheless urged central banks to “stay the course”, given its view that the risk of doing too little to tackle inflation outweighs the costs of not being bold enough. 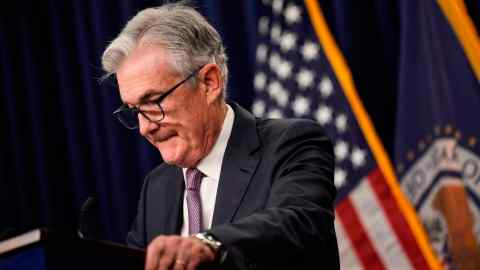 Signs of global financial stress have begun to crop up since the September meeting, exacerbated in part by extreme volatility in UK markets as the Bank of England has struggled to contain the fallout from the government’s tax-cutting package announced late last month.

Despite multiple emergency interventions from the BoE, the UK’s government bond market has continued to seize up.

Another strong jobs report in September — which showed the creation of 263,000 positions and the unemployment rate dropping back to its pre-coronavirus pandemic low of 3.5 per cent — has also given officials cover to plough ahead with aggressive rate rises. Policymakers as of the last meeting characterised the labour market as “very tight”.

Christopher Waller, a Fed governor, last week said the central bank does not yet face a “trade-off” between its employment goals and its inflation goals, meaning its “monetary policy can and must be used aggressively to bring down inflation”.