Bank of England says ‘lessons must be learned’ from pensions crisis


The Bank of England has said “lessons must be learned” from the pensions crisis that triggered an unprecedented intervention in the UK gilt markets, and stressed the need for action to mitigate similar risks in other parts of the financial sector.

“While it might not be reasonable to expect market participants to insure against all extreme market outcomes, it is important that lessons are learned from this episode and appropriate levels of resilience ensured,” the BoE’s financial policy committee said in its quarterly update on Wednesday.

The BoE also warned that UK households and companies were under strain as high interest rates, high energy costs and the cost of living crisis combined to make it harder for them to pay bills and loans. Mortgages were a particular concern, with the bank warning that household debt levels could hit historic highs.

A sharp spike in UK government bond yields following chancellor Kwasi Kwarteng’s September 23 “mini” Budget triggered a wave of cash calls for pension funds that had been using derivatives to manage their risk.

Pension funds were then forced to sell gilts to meet the cash calls, leading to a spiral that prompted the BoE to step in with a £65bn bond-buying programme to stabilise markets.

The BoE said the “dysfunction” in the gilt market shared characteristics with the broader non-bank financial system, where big risks to financial stability can build up outside of the purview of regulators.

The bank’s financial policy committee cited potential vulnerabilities in money market funds and open-ended funds, which could trigger broader market volatility if they were forced into fire sales to meet margin calls in a falling market.

The report added that the Financial Stability Board, a global convening body of regulators and central banks, was already working to improve the “resilience” of non-bank financial institutions.

“The FPC judges it crucial that this work results in effective policy outcomes to improve the resilience of non-bank financial institutions globally to sharp reductions in asset prices and liquidity,” it said.

The BoE said it would work with both the Pensions Regulator and the Financial Conduct Authority “to ensure strengthened standards are put in place” in the pensions market. Pension funds are scrambling to shore up their liquidity buffers before the BoE’s bond-buying programme ends on Friday.

Nikhil Rathi, chief executive of the FCA, which regulates the asset managers offering the derivatives bought by pension funds, said the regulator would look at “the lessons that are to be learned for the future as a regulatory system” from the recent blow-up in pension schemes derivatives strategies. But he stopped short of saying the FCA could have done more to see the systemic risks building.

The pensions crisis comes against the backdrop of a global economic outlook that the BoE said had “continued to deteriorate significantly” since its July update, with soaring interest rates and heightened geopolitical tensions. 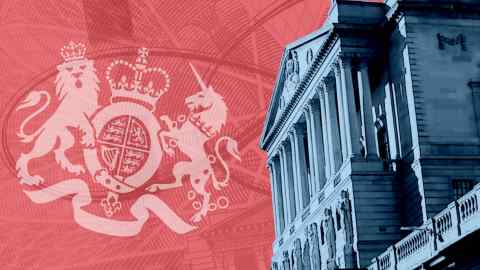 The bank also raised concerns about the pressures facing UK households and businesses. With 20 per cent of fixed-rate mortgages due for refinancing in the next year, a historic percentage of households are expected to have “high” levels of mortgage debt by 2023, at a time when they are facing soaring energy prices and high inflation, making them “more vulnerable to shocks”.

Rathi later told reporters that his agency was looking “very closely” at the implications for 3.2mn households whose fixed-rate mortgages expire in the next 24 months.

He added that the FCA was trying to understand the dynamics around potential defaults as those borrowers’ loans are reset to higher rates.

Companies, in particular small and medium-sized enterprises, are also facing higher interest rates and pressures on their costs — although their debt levels are not yet near financial crisis peaks, putting them in a better position overall.

The BoE stressed that the country’s banks had “considerable capacity to support lending” and would be able to withstand “the impact of severe economic outcomes”, such as higher levels of loan defaults.

Is It Really Hard To Start A Business When You’re Over 50?