Pensioners returning to work to cope with the rising costs of living are being warned of tax traps that lie in wait for those coming out of retirement.

The alert follows a record increase in UK employment among the number of people aged over 65. An extra 173,000 joined the workforce between April and June this year, bringing the total to 1.46mn.

The Office for National Statistics said the surge was driven by rises in part-time work. Nearly one in eight people aged over 65, or 12 per cent of this age group, are now in work.

The surge in pensioners rejoining the workforce comes as household expenditure for many retirees has soared over the past year. At the same time, retirees drawing on their defined contribution pension pots will have seen these funds hit by stock market falls.

“Most pension funds will have fallen in value and this will make many savers feel that they have no other option than to return to work to assist in meeting their increased costs, allowing their pension funds time to recover,” said Gary Smith, financial planning director at Evelyn Partners, a wealth manager.

“Many retirees will be getting a scare that their pot will not last for as many years of retirement as they had anticipated.”

However, some pensioners returning to work could be landed with unexpected pension tax bills, experts warned. 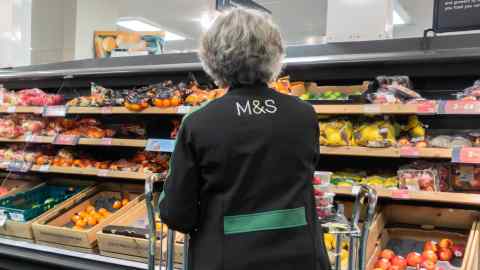 Anyone aged over 55 who has begun to draw more than tax-free amounts from a flexi-access defined contribution pension is at risk of triggering a large reduction in their annual pension savings allowance from £40,000 to £4,000.

This reduced limit in the amount that someone can contribute to their defined contribution pension while still getting tax relief is known as the Money Purchase Annual Allowance.

This becomes an issue if the worker rejoins the company pension plan and begins to save into it again, with the employer also making contributions.

“Based on contribution rates of 8 per cent, a salary of over £50,000 would result in contributions exceeding £4,000 per tax-year, and the individual would be personally taxed on any excess above £4,000,” said Smith.

Currently, those over state pension age, or 66, are not eligible to be automatically enrolled into a workplace pension plan but can ask to join and begin saving into the plan, subject to their annual allowance.

While there are advantages to returning or continuing to work beyond a targeted retirement age, Becky O’Connor, head of pensions and savings at investment broker Interactive Investor, said the record rise in employment among over-65s showed that reality was “biting”.

“During the pandemic, when savings were high and people were forced to stay at home, we saw many people bring forward decisions to give up work, because retiring early felt achievable,” said O’Connor.

“But now that inflation is rampant and stock market returns are volatile, the tables have turned, the retirement numbers don’t quite add up and older people are taking a practical approach and returning to work in their droves.”