Unions on Monday condemned the payment of a bonus to the chief of the UK’s largest private sector pension as tens of thousands of members faced big cuts to their retirement benefits.

The £90bn Universities Superannuation Scheme revealed that it had paid a £108,000 performance bonus to chief Bill Galvin in the financial year ending March 31 2022.

The payment, revealed in the USS annual accounts, enraged members of the USS, including lecturers and librarians, who are to be balloted on taking further strike action over pension cuts deemed necessary to plug a £14bn hole in the scheme’s finances.

The deficit was identified by USS during a valuation in 2020 of the scheme’s assets and liabilities, which took place as global markets crashed because of the Covid-19 pandemic.

In response, USS proposed that sponsoring employers, and around 200,000 active members, pay more for pensions or accept smaller benefits in future to help plug the funding gap.

In its annual accounts published on Monday, the USS confirmed that this £14bn deficit had decreased to £1.5bn as of March 2022, largely because of a strong investment performance since the height of the pandemic.

“The cuts were predicated on a flawed valuation conducted in 2020 at the height of Covid as global markets were crashing,” said Jo Grady, general secretary of the University and College Union, which represents USS members, including lecturers and librarians.

“Whilst staff try to figure out how to manage the impact of USS pension cuts worth hundreds of thousands of pounds, Bill Galvin is wondering how best to spend his £100,000 bonus and his £480,000 salary. It is a disgraceful show of excess that will rightly be condemned by university staff up and down the UK.”

Galvin is a former chief executive of The Pensions Regulator. He benefits from a long-term USS incentive plan, where deferred bonuses are paid based on performance and other targets being met.

The most recent bonus was half the £214,325 he was paid in the previous financial year. 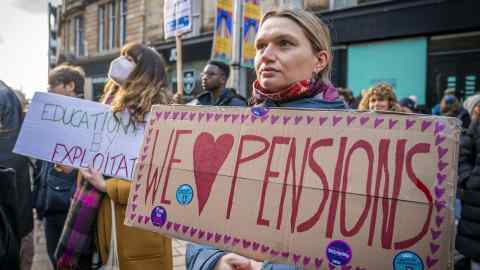 Dame Kate Barker, chair of the USS trustee board, said the scheme’s latest annual review demonstrated that USS was a “very well-run pension scheme”, outperforming its targets and benchmarks across investments and pensions administration.

“There is no escaping that the challenges and changes arising from the 2020 valuation have impacted members’ satisfaction scores overall,” she added. “We completely understand these sentiments, but we have had to make very difficult judgments to ensure members’ pensions are secure and can safely be paid.”

The USS has held out the prospect of lower contribution rates or boosting benefits if the scheme’s positive performance continues.

Last week, the scheme estimated that the deficit would be “more than £3bn” if the benefit cuts had not been introduced in April.