Rules governing childminders and nurseries in England could be relaxed as part of a raft of proposals to reduce the escalating cost of childcare that is increasingly squeezing working families.

The Department for Education announced on Monday it would consult on plans to change adult-child ratios for two-year-olds in nurseries from 1:4 to 1:5, a move it said could decrease childcare costs by up to 15 per cent.

With the price of childcare outpacing wages and with inflation driving a broader squeeze on incomes, the government pledged the change would drive down costs for parents. But leaders in the sector said it failed to address the long-term underfunding that is pushing up bills.

“The government is wasting its time consulting on relaxing ratios, rather than just admitting that if we want to have affordable, quality, sustainable care and early education . . . we need to invest substantially more,” Neil Leitch, chief executive of the Early Years Alliance, a sector membership organisation, said.

Unaffordable childcare is fast becoming a hot topic for Downing Street. According to the latest survey by Coram Family and Childcare, a charity that promotes children’s rights, childcare costs have increased 60 per cent in cash terms between 2010 and 2021, twice as fast as average earnings, and a full-time nursery place for an under-two in London is now £19,000 a year. 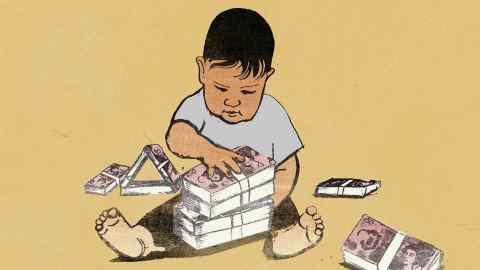 The availability of childcare has fallen during the pandemic, with only 57 per cent of local authorities reporting enough childcare for under-twos, and the number of parents accessing government support has “plummeted”, according to the charity.

To tackle the problem, and encourage women to return to work, the government has pinned its hopes on increasing childcare places by cutting “red tape”.

It said relaxing the supervisor-child ratio would give providers more flexibility, driving down costs while maintaining safety, quality and care, and bring England in line with other countries including Scotland.

The government pledged to reduce the burden of inspection and quality standards, and provide financial support to reduce the upfront costs of being a childminder.

It will also launch a campaign to increase the take-up of tax-free childcare, which is worth up to £2,000 a year but had helped only about one-quarter of the children eligible for it.

Will Quince, minister for children and families, said the changes would “allow providers to provide services more flexibly and make sure funding gets where it is needed most”.

However Leitch said the idea that “meaningful reform” could be achieved without the government spending “a single extra penny” was “laughable”.

The government currently funds 15-30 hours of childcare for three- and four-year-olds, but providers say this falls far short of covering costs, and younger children receive much less support.

An investigation by the Early Years Alliance last year found civil servants estimated early-years places cost an average of £7.49 per hour — far less than the £4.89 average received by local authorities.

“The government has been knowingly underfunding the early-years sector for years, and it is this — not ‘red tape’ — that is driving up early-years costs, and keeping pay levels in the sector so low that 40 per cent of our workforce are actively considering leaving,” said Leitch.

Bridget Phillipson, Labour shadow secretary of state for education, said the announcement was “pathetic” and that tweaking ratios would make no difference to costs for parents.

“The government is out of ideas,” she said.

Business leaders need to speak up for democracy