Most Americans dread doing their taxes. Surveys show as much. But as many as 40% rely on money from tax refunds to satisfy some financial obligation. Ben Borodach, a former Deloitte fintech strategist and the CEO of tax service provider April, believes this points to the need for taxpayers to change their behavior from thinking about taxes as a once-a-year obligation to a “continual,” yearlong assessment.

“Understandably, the complexity of the tax code is a turnoff for many Americans,” Borodach told TechCrunch in an email Q&A. “[But a major challenge] is that the tax industry is often forced to play catch-up to the realities of a rapidly expanding tax code, with changes from remote work, recent global regulations, tax incentives for climate, and sustainability and new assets like crypto and NFTs. The onus is overwhelmingly on American taxpayers to interpret these complexities.”

April, which Borodach co-founded in 2021 with Daniel Marcous, previously the CTO of Waze, is an attempt to cut through the complexities of the U.S. tax system by integrating taxpaying processes with the banking and financial apps people already use. April users connect their payroll, bank statements, mortgage, prior year’s tax return and other finance apps to the platform and then tell April about significant tax events over the past year (e.g., moving to another state). After a quick review, April crunches the numbers and generates filing documents.

“April’s main goal is to empower the taxpayer,” Borodach said. “We can drastically reduce the tension of tax filing, helping American taxpayers avoid overpayments and attain a better grasp on their overall financial picture, with the full power of the tax code at their disposal.”

To Borodach’s point, many Americans overpay come filing time. According to a 2019 report from Credit Karma, 46% of taxpayers expected to get refunds of more than $1,000 for their 2019 taxes — meaning they were overestimating their income taxes throughout the year. Moreover, over half were unaware that they could take actions that impact the refund amount they receive, if any. 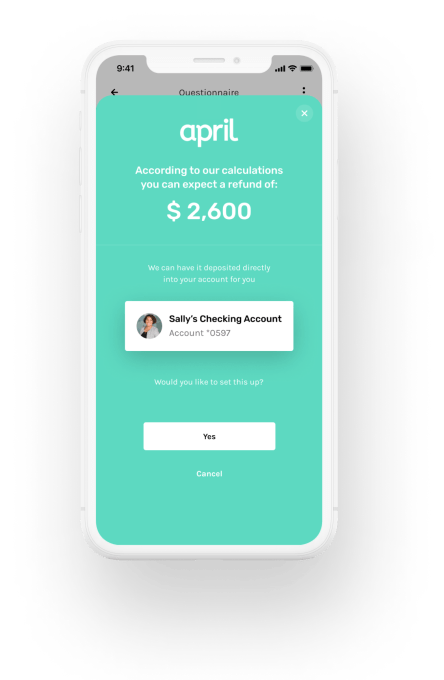 “The current environment arguably has an even greater focus on cost-consciousness and potential for economic contraction, meaning tax has actually increased in importance,” Borodach said. “The shift to digital has also increased the number of taxpayers adopting digital-first solutions, moving them away from brick-and-mortar tax preparers. April is essentially a certified public accountant in your pocket, and with U.S. consumers increasing their preference for digital channels, tax services will follow suit.”

But April uniquely partners with banks and financial institutions such as Propel to build its tech into their apps and websites. Borodach claims the company has commitments of tens of thousands of tax filings ahead of next year, which was apparently enough to convince VCs to invest. April today closed a $30 million Series A funding round led by Treasury with participation from QED, Nyca Partners, Team8, Euclidean Capital and Atento Capital, bringing the startup’s total raised to $40 million.

It doesn’t hurt that funding for fintech startups was on the rise prior to the current economic headwinds. Financing climbed to $131.5 billion in the sector last year from $49 billion in 2020, according to CB Insights. The Bank for International Settlements, meanwhile, estimates that in the decade between 2010 and 2020, fintech companies attracted more than $1 trillion in backing.

The tides might be turning. But as my colleagues Alex Wilhelm and Mary Ann Azevedo recently wrote, the pace of fintech investing has generally outshone the global VC boom.

“Since its launch earlier this year, April has helped several thousand American taxpayers file their taxes in an average of 15 minutes, helping them access millions in refunds,” Borodach said. “Unlike legacy tax providers, April [does] away with the silos traditionally existing between tax and financial planning … Our platform helps fintechs create a more holistic relationship and drive engagement with their membership by creating a year-round and continuous interaction around tax optimizations, advice, and broader financial goals.”

April plans to invest the new capital in R&D and “increase its operational capacity in preparation for next tax season.” A part of that effort will involve growing April’s workforce from 30 employees to around 50 by the year’s end, according to Borodach.

Asset Diversification Is Critical to Hedge Against Economic Upheavals

Why rate hikes could be good news for home buyers (Podcast)

Fiserv, LG back Korea Credit Data as the SME-focused fintech startup raises another…

Despite the venture slowdown, fintech startups are still hiring • TechCrunch