SumUp has become the latest European fintech to be hit by a global sell-off in technology companies, after the London-based start-up raised funds giving it a valuation of €8bn (£6.9bn), less than half the price tag suggested for the group earlier this year.

SumUp, which provides payments services for small merchants, said on Thursday it had raised €590mn split evenly between debt and equity at an enterprise value of €8bn. However, in January it was reported that SumUp was targeting a value as high as €20bn, which would have made it one of the UK’s most valuable start-ups.

Marc-Alexander Christ, chief executive of SumUp, said that he proceeded with the round despite the lower valuation because it would give “peace of mind to investors, that even during a black swan event . . . we can still raise money”.

He added that the company “doesn’t necessarily need the money, we are close to break even”, but that the extra funding provided a buffer for a “rainy day” and could be used to finance acquisitions as start-up valuation.

The funding round, the start-up’s first since 2017 when Christ said it was valued at closer to €400mn, was led by private equity firm Bain Capital. BlackRock, Centerbridge, and Crestline were among other asset managers to invest.

SumUp is far from the only payments company affected by investors souring on what were until recently some of the world’s most highly valued technology companies.

Last week, it was reported that Swedish “buy now, pay later” business Klarna — which for a time was Europe’s largest privately held company — is trying to raise new cash at less than half its peak $46bn valuation.

SumUp and Klarna are suffering from the sell-off in listed tech companies, which have plunged about 25 per cent this year. Investors have been spooked by actions taken by central banks to tame inflation, the anticipated slowdown in consumer spending from the cost-of-living crisis and the war in Ukraine.

Christ said he was actually “happier” to be valued at €8bn, noting that the value is still 20 times larger that compared with five years ago. 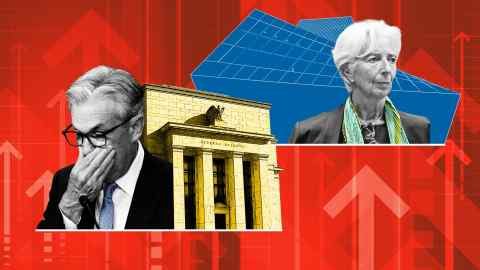 “It definitely makes life easier,” he said. “I can very comfortably say the €8bn is a true and fair valuation, because that’s the price people put on the company in the worst of markets. I don’t think the price will ever be any lower than that.

“I wasn’t really involved in the $22bn valuation . . . the market was overheated [and] there were all sorts of rumours at the time,” he said. “Someone looked at public numbers and guessed at what could be.”

SumUp, which was founded in 2012, works with 4mn small businesses globally, providing merchants with a business account and card, as well as invoicing tools and other payment services.

Christ said even though the business is growing organically, he would consider using the new funding further acquisitions.

“In this environment we think we will see good opportunities for M&A deals once people realise that money is not free any more,” the founder said.

Last year, it bought US customer loyalty site Fivestars, for $317mn. The fintech has snapped up other point-of-sale businesses, including UK-based company Goodtill and Tiller, which is headquartered in Jersey.

It bought Polish ecommerce company Shoplo in 2019, which boosted its active users by 1mn.

SumUp has also raised debt over the past few years to help fund its expansion. Last year, it raised €750mn from Goldman Sachs, Temasek, Bain Capital Credit, Crestline, and Oaktree.

A ‘mini-Budget’ for those on maxi incomes