Bank of England accused of going soft on inflation


The Bank of England has been accused of going soft on its core mandate after adopting a less aggressive stance on monetary policy than the US Federal Reserve — despite expecting inflation to hit 11 per cent this year.

The UK central bank on Thursday dropped guidance that more interest rate rises were likely in the months ahead, even as it warned inflation would reach a high in October. It raised rates by an expected 0.25 percentage points to 1.25 per cent, as three Monetary Policy Committee members who called for a 0.5 percentage point increase were outvoted.

Ruth Gregory, of Capital Economics, said core UK inflation was likely to be above the US until mid-2023 and therefore “the MPC will need to move policy to a restrictive stance relatively quickly”.

But the bank’s stance reflected its view that the UK economy will barely grow in the next three years and therefore there is less scope — or need — to raise rates as aggressively as elsewhere.

By contrast, the Fed had exploded a grenade under financial markets a day earlier with a 0.75 percentage point rise in its benchmark interest rate to a target range of 1.5 to 1.75 per cent, even when the US has a smaller inflation problem than the UK.

Fed chair Jay Powell was unequivocal about the intention that lay behind the move. “We’re strongly committed to bringing inflation back down and we’re moving expeditiously to do so,” he said.

The BoE’s relative passivity proved contentious, even among former members of its MPC.

Andrew Sentance, now a senior adviser at Cambridge Econometrics, said: “Actions speak louder than words. The action from MPC . . . was woefully short of what is needed to curb the biggest inflationary surge for 40 years.”

By contrast, professor Danny Blanchflower of Dartmouth College in the US, criticised the BoE for tightening policy at all. Accusing the BoE of “incompetence”, he took to Twitter to say: “We are likely already in recession . . . made worse by the rate rise.”

There is no doubt that the two central banks view the outlooks of their respective economies differently.

The Fed is involved in taming a policy-induced boom and a high-pressure economy that has blown up into an inflationary period. It wants to cool things down with higher rates and still expects reasonable growth as it lowers the rate of price rises by making borrowing more difficult for Americans.

While Powell was clear that the chances of achieving a “soft landing” had slipped and he wanted a “softish” landing, he still expects reasonable economic growth in the US.

The median prediction of the Fed’s interest rate setting committee was that the US economy would expand 1.7 per cent during 2022 and 2023.

The BoE’s view, however, is that the UK’s coming period of very slow growth — with multiple quarters of contractions — is needed to get inflation down.

It expects inflation to fall back to its 2 per cent target, partly as commodity prices stabilise “albeit at elevated levels” and partly as a result of “the combined impact of weaker real incomes and tighter monetary policy on domestic demand”.

The BoE did not update its May forecasts at the meeting this week, but these are much weaker in comparison. Over the same time period, it expects growth to be only 0.7 per cent this year and 0.2 per cent next year.

The stance makes life difficult for the UK government and Conservative MPs. Since the central bank thinks it is necessary to keep growth only at a snail’s pace until the next election to control prices, MPs cannot easily demand tax cuts.

These would boost spending and potentially force the BoE to move more actively to control prices.

Prime Minister Boris Johnson and chancellor Rishi Sunak have both said tax cuts will have to wait until inflation has come down. 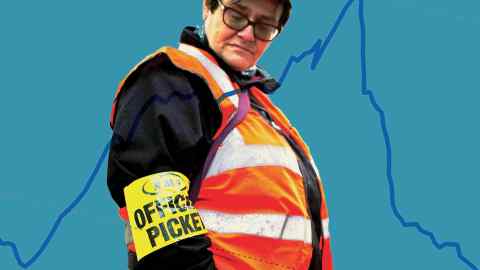 The passive nature of the BoE’s messaging is also difficult for the central bank itself. It is waiting to see whether companies decide that they feel they want to compensate their employees for rises in the cost of living and whether the UK has moved more persistently into an inflationary environment.

It left open the option of acting “forcefully” if inflation did not subside naturally, and increasingly many in the City think it will have to adopt this approach in the months ahead.

Steffan Ball, chief UK economist at Goldman Sachs, said: “We do not think the BoE is insulated from the recent swath of hawkish central bank shifts,” predicting that the BoE would be forced to raise rates by 0.5 percentage points at the next two meetings, leaving UK rates at 2.25 per cent by September.

The Lex Newsletter: a week of peak reverse ferret

BoE not briefed on ‘mini-Budget’ ahead of announcement, says Bailey