The Ukraine war casts its shadow over Davos


During Davos week, the Swiss ski resort becomes a sea of corporate and national marketing. Walk down the Promenade and you will pass the shopfronts of the Bank of America, Meta, Indonesia House and the India Lounge to name a few.

This year, there has been a rebranding. What was previously the Russia House, playing host to the country’s corporate and political elite, is now the Russia War Crimes House — taken over by Ukrainians to highlight the appalling consequences of the invasion of their country.

On Monday morning, Oksana Kyrsanova, a doctor recently evacuated from Mariupol, gave tearful testimony of the horrors of trying to save the wounded and dying while the city was under relentless Russian bombardment.

This is not the normal Davos fare — even this year. But it is more than just a discordant note in a festival of dealmaking and glad handing.

The war has fundamentally changed not just the atmosphere, but the underlying rationale of the World Economic Forum.

For 30 years, from the end of the Cold War to the start of the pandemic, geopolitical rivalries took a back seat to globalisation — and nowhere was this more evident than here. The informal motto of Davos was “make money, not war”.

The financiers and CEOs who throng the hotels became known as the “masters of the universe”. Political leaders — including Xi Jinping, Narendra Modi and Vladimir Putin himself — came to pitch to the assembled billionaires.

Now the politicians and generals are back in charge — and the business people, who assumed for decades that the whole world was a potential market, are disorientated.

For the Davos crowd, the implications of the conflict are both immediate and long term. The struggle between Russia and the West has a crucial economic component — and it is not clear which side has the upper hand.

One energy industry boss predicts that, by this time next year, the EU will have successfully weaned itself off Russian gas — delivering a disastrous blow to Russia’s national finances, still benefiting from $1bn a day in oil and gas revenues. But western economies could soon come under politically intolerable strain if food and energy prices spike higher again this autumn.

The economic consequences of the conflict for the developing world, heavily reliant on Russia and Ukraine for wheat, look even more disastrous. David Beasley, executive director of the World Food Programme, told a panel that unless the Ukrainian port of Odesa was opened in the coming weeks “we will have famines”. Beasley argued that the consequences of food shortages were already being felt in political unrest in countries from Sri Lanka to Peru. 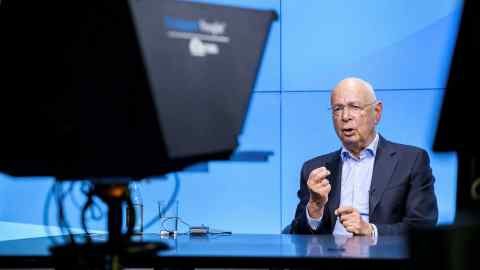 The Davos crowd is also increasingly preoccupied by the idea that the economic isolation of Russia may not be a one-off. One leading financier notes that the US Congress is considering hundreds of potential measures to restrict economic relations with China. A Chinese invasion of Taiwan may not be necessary to trigger these kinds of measures. Given the growing level of bipartisan hostility towards Washington, even a Chinese decision to buy Russian oil — or to help Moscow by other means — could be enough to trigger secondary American sanctions.

Beyond that lies a broader question about whether America is in danger of overplaying its hand. Those who think primarily about the plight of Ukraine are gung-ho for using confiscated Russian assets. But some business people are concerned about the legal basis for actions such as that, worrying that the West is damaging its reputation for due process and the respect of property rights.

One financier says that countries and businesses all over the world are now asking themselves whether they too might, one day, be targeted by US sanctions or asset freezes. He sees increasing interest in ways of diversifying away from dollar-based assets.

The effectiveness or otherwise of western sanctions will be a test of the nature of the emerging world order. If the Russian economy is crushed and isolated, it will signal that we still live in a US-dominated world. But if Putin’s Russia survives and other countries begin to diversify away from America, then a very different sort of scenario may emerge.

Has US hiring started to cool?

Biden administration split on whether to remove China tariffs