Graduates on lower to middle earnings will lose an additional £30,000 from their lifetime income as a result of government reforms to the student loan system, according to a leading think-tank.

The Institute for Fiscal Studies said on Friday that reforms designed to cut Treasury spending on higher education will hit lower earning graduates and benefit those on higher incomes, while leaving most paying around £750 more a year from 2027 if they earn more than £34,000,

It concluded that the reforms would “transform” the student loan system from one that functions like a graduate tax to one more similar to conventional loan repayments. More than 70 per cent of graduates will repay in full under the new system compared with about 20 per cent now.

“Student loans reform will reduce the cost of loans for the taxpayer and the highest earners, whereas borrowers with lower earnings will pay a lot more,” Ben Waltmann, the author of the IFS report, said. “The system has been made less progressive by this.”

The minister is saddling young people with unimaginable debt for the next 40 years of their lives. This is nothing more than an attack on opportunity.

Under the reforms which were announced in February, graduates will begin paying back their student loan with a 9 per cent cut of their salary above earnings of £25,000, compared with the current threshold of £27,295.

They will make repayments for 40 years before the loan is forgiven, compared with 30 now. The government also cut the interest rate on loans to bring it in line with inflation.

The changes, which will affect students starting university next year, aim to reduce the amount paid out in student loans that is not paid back. Around 46 per cent of loaned money currently goes unpaid, according to the IFS; it calculated this will drop to 34 per cent at most.

The average student loan debt is currently £45,000, according to government figures.

Michelle Donelan, minister for further and higher education, said in February that the reforms were “about bringing fairness into the system” and preventing outstanding student debt being “paid by the taxpayer”.

But Paul Blomfield, chair of the all-party parliamentary group for students, said the changes would “make graduates pay the price, with the lowest earners being hit hardest”, a view supported by the IFS analysis.

Middle earning graduates will pay back £20,000 more than they do now while those classified as lower earners, or making around £30,000 a year by the age of 30, will pay back £30,000 more, thanks to the lower salary threshold and longer repayment terms. 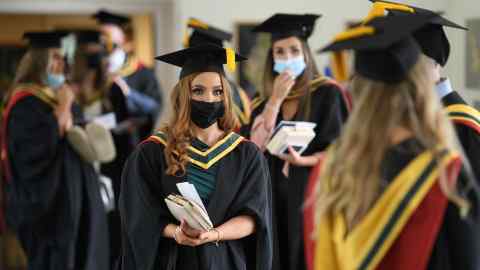 Waltmann said the changes announced in February would save the taxpayer around £2.3bn per annual intake of students in the long term.

However he added that the eventual impact of the reforms was “hugely uncertain” and depended on “economic developments and on government policy many decades into the future”.

The changes also make England even more of an outlier on university funding compared with other governments that spend more on higher education, the IFS said.

Larissa Kennedy, the president of the National Union of Students, called the reforms “calculated cruelty”.

“The minister is saddling young people with unimaginable debt for the next 40 years of their lives. This is nothing more than an attack on opportunity,” she said.

VCs, unicorn founders back Truora, a startup that helps LatAm businesses onboard users via WhatsApp – TechCrunch