The UK markets regulator is consulting with asset managers about introducing an “exceptional” measure to help limit the damage to investors from Russia’s invasion of Ukraine.

The Financial Conduct Authority said it is considering authorising UK retail funds to use so-called “side pockets” to segregate Russian and Belarusian assets.

If the regulator goes ahead, side pockets will make it possible for fund managers to separate out Russian and Belarusian assets they cannot sell or value from their other investments, allowing investors to enter funds without gaining exposure to Russia. Those currently locked in could exit their positions and frozen funds could restart dealing.

The FCA said the use of such facilities would be optional for fund managers. “The side pocket proposals would be limited in scope to assets that are illiquid as a result of the Russia/Ukraine war. The precise scope would be determined as part of the consultation,” the FCA said.

The regulator added that it would aim to ensure all investors were treated fairly if assets were separated, and without encouraging new, speculative inflows at the expense of existing stakeholders.

Over two dozen fund managers have gated Russia and eastern Europe-focused funds since the invasion of Ukraine began three weeks ago, trapping billions of dollars worth of investment, according to research by credit rating agency Fitch and company announcements. UK fund managers Schroders, Abrdn and Liontrust are among those to have announced they had frozen funds due to the conflict. 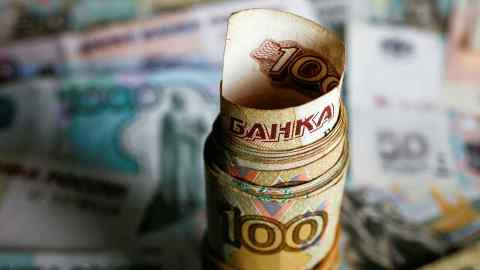 The FCA said that while many Russian assets would have a value of zero, investors who sold up would retain the rights to any eventual value should circumstances change and trading resume. Many investors, including Fidelity International and hedge fund Prosperity Capital Management, have announced their intention to write down their Russian holdings substantially.

“Side pockets potentially offer a solution for funds suspended due to the crisis in Ukraine. Ensuring they work appropriately and all investors are treated fairly will be paramount and we look forward to participating in this consultation,” said Chris Cummings, chief executive of the Investment Association.

Foreign investors held nearly $170bn in Russian assets at the end of 2021, but markets in Moscow have been closed since shortly after Russian president Vladimir Putin’s troops invaded Ukraine about three weeks ago. The value of Russian assets on international markets has plunged following the launch of sanctions on an unprecedented scale. All Russian securities trading in London were suspended by March 4.

Bondholders are now waiting to confirm if Russia will default on its debt for the first time in over two decades. A $117mn coupon on two Russian bonds is due on Wednesday, the first since Putin’s invasion of Ukraine.

Putin has said that bondholders in “unfriendly” countries could be paid in roubles, rather than a foreign currency. Fitch has said this would constitute “a default or a default-like process”.

UK tax receipts set to rise £12.5bn more than expected due to inflation