Investing in a lower-carbon future


Given the constant drumbeat of terrible news from Ukraine, you might not have noticed that the price of carbon, as measured by emissions permits, crashed this month.

Looking at the market for these permits to emit carbon dioxide in the biggest market, the EU, the message is grim for all those worried about curbing emissions: prices slumped from a recent high of around €96 per tonne of CO2 last month to as low as €58 in early March, before recovering some ground to the current €78.

It doesn’t take a genius to work out what’s going on. Investors are betting that the EU will relax its rules and let rip on emissions, perhaps through more coal-burning power stations. There is a real concern that stock markets are signalling an impending recession. This could have an indirect impact via lower carbon prices. So it might seem like an odd time to tackle the subject of investing in carbon markets via tracker funds.

There are currently two easily tradeable trackers available as exchange traded products. Both follow the EU’s trading system via EU allowances (EUAs), or permits to pollute 1 tonne of CO2. One is from Wisdom Tree Europe and has a ticker CARP for the sterling version. It has a low headline total expense ratio (TER) of 0.35 per cent plus an additional daily swap fee of 0.001233 per cent. The reason I mention the swap fee is that this product tracks the price using futures contracts.

The other, newer product — SparkChange Physical Carbon EUA — is issued by HanETF. It is slightly different in that it invests in actual physical EUA contracts and doesn’t use futures contracts. The stated total expense ratio seems higher at 0.89 per cent, but there’s no concern about using futures or costs for utilising swaps to make the return from tracking the price. The GBP ticker for the SparkChange ETP is CO2P.

So, why look again at these products? Won’t the price fall even further as the energy crisis intensifies? Let’s separate out the short run — say the next six to 12 months — from the medium to longer term. I do think prices could sink lower — but sooner or later that long-term objective of curbing industrial emissions has to be dealt with.

Many observers focus on electric cars and renewable energy as catalysts for change, but in my view the EU scheme — and others like it, such as the UK ETS scheme — sends a very loud message that industrial sectors including steel, smelting and chemicals need to develop new technologies to decarbonise. 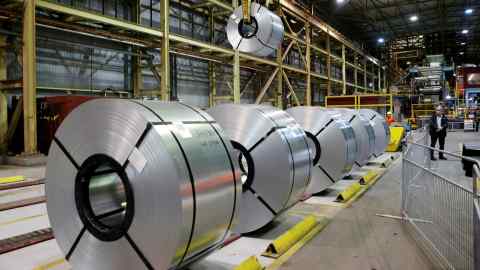 Sure, that’ll take a back seat now, if Germany were to stop its nuclear shutdown programme and, less helpfully for emissions, reopen some of its coal-fired power stations. But if we are to keep warming below the 1.5C target, and even 2C, industrial users need to switch en masse to new energy sources. One of the most effective ways of doing that is by putting up the price of carbon emissions.

There’s another reason why prices will probably start rising again at some point in the next 12 to 18 months. The EU has been tinkering with the system underlying this EUA market via something called the Market Stability Reserve. This has had the effect of reducing the supply of fresh carbon allowances via auctions.

Unless something drastic happens, the number of those new issues to pollute will be reduced by 50 per cent, pushing up the cost of carbon emissions. We are also seeing strong industrial production increases post-Covid (though that could be derailed by an energy price-induced recession). Burn more coal and you have more emissions — but the supply of permits is decreasing.

There are also new emissions schemes on the horizon, such as the inclusion of maritime vessels in the European scheme, plus increasing talk of a carbon border tax. That has left many big corporates looking to hedge their emissions by buying these permits.

If we do have a recession in the next year — and stock markets are signalling this — those companies might unwind their hedges and sell their permits into the market, which could reduce prices for a while. But the direction of travel in the medium to long term is clear. Carbon prices need to rise.

And what’s true of the EU is even more so in the rest of the world. Jan Ahrens, head of research at SparkChange, says: “In the grand scheme of things, global carbon prices are fundamentally too low. According to the Real Carbon index, it cost $5.60 per tonne of CO2 to pollute. However, the price is a signal of global ambition, so it’s fair to say that the regions that experience low carbon prices are not ambitious enough to reduce emissions fast.”

Various academic studies suggest that carbon prices should be in the range of $75 per tonne, and there’s a good chance that the Chinese in particular will start to get serious about pushing up the price of carbon.

A wider financial community embracing everyone from hedge funds and fintech players to crypto enthusiasts is jumping into the carbon markets, financialising transactions as they have with other commodity-based markets. In the voluntary offset markets — where you buy a carbon offset when you fly, for instance — carbon prices have increased dramatically in the past few years as companies look to spruce up their green credentials. Pricing and regulation is all over the place but dozens of fintech businesses are swarming in. I’m keeping a particularly close eye on how farmers could end up making more money from sequestering carbon in their soil than raising livestock.

And even the crypto bros are pushing in. Ahrens says projects such as KlimaDAO or MossCO2 are tokenising credits to make them tradeable. Blockchain miners are also waking up to their dreadful green footprint, while crypto exchanges such as Gemini are experimenting with adding carbon allowances to their portfolio to balance the carbon footprint of its emissions.

Short-term prices could fall even further but I would echo Ahrens when he observes: “Since most polluters are still scared of high carbon prices in the future, any major dip will recover reasonably fast as corporates will take these as opportunities to hedge their future positions.” Add it all up, and the drivers behind higher carbon prices now appear unstoppable.

David Stevenson is an active private investor and has interests in securities where mentioned. Email: adventurous@ft.com. Twitter: @advinvestor

Most Wall Street Experts Now Predict Stagflation—Here’s What That Means For Investors And The U.S. Economy