Jonathan Brearley, chief executive of Ofgem, said on Monday that the regulator did not have legal powers to completely ban forced installations of prepayment meters but it would examine companies’ “checks and balances” and act against those who “do not take due care”.

Most customers pay for their power after use but energy providers can force people on to more expensive prepaid meters when they fall behind with regular payments.

The number of people who have been moved on to prepayment tariffs has risen sharply as they grapple with soaring energy bills and the cost of living crisis.

Brearley’s comments came after Grant Shapps, the business secretary, told suppliers over the weekend that they should voluntarily end the practice of switching households to prepayment metres or face being “named and shamed”.

Speaking at an event held by the Institute of Government think-tank, Brearley also called for a “serious assessment” of a cheaper social tariff for low-income households, which would mean those that are least able to pay are charged a lower price for their power.

Current rules require suppliers to explore the financial help on offer or carry out appropriate assessments before they can forcibly install prepayment meters or remotely switch a household’s smart meter to a pre-pay tariff.

But Brearley said some people were being moved “without even knowing about it”. He cited an example of a customer in Glasgow who “left to go on holiday and returned to find he’d been switched to pre-pay without his knowledge and had no way to top up”.

“Although there is good practice in many places, no company came through [in initial investigations] without needing to improve and all have been required to submit plans to meet the standards we set,” Brearley said.

The government has introduced an energy price guarantee scheme aimed at restricting a typical household bill to about £2,500 a year until the end March, and to around £3,000 until spring 2024.

Although wholesale gas prices have been falling, Brearley said it was unlikely that prices would return to pre-pandemic levels and that new approaches were needed in Britain’s energy sector.

Shapps has written to energy suppliers telling them they are not doing enough to help vulnerable households and should be offering credit or debt advice, with pre-pay installations a last resort. 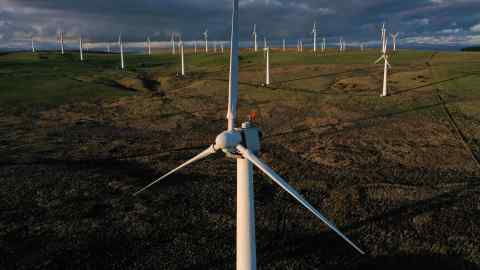 Citizens Advice, the consumer lobby group, said last month that 3.2mn people across the UK ran out of credit on their prepayment meter last year because they could not afford to top up.

One in five prepayment meter customers last year spent at least 24 hours without gas or electricity, leaving them unable to turn the heating on or cook a hot meal, the group found.

Energy UK, which represents the industry, said: “Suppliers are already required to have exhausted all other options before installing a prepayment meter by warrant.

“Only after repeated unsuccessful attempts to contact the customer to discuss repayment options and offer support and after checks to ensure they do not go ahead when customers are in the most vulnerable situations.”

Investors Are Too Optimistic on Stocks, BlackRock Says