British designer Stella McCartney has ushered mycelium leather handbags, plant-based faux furs and bioengineered “MicroSilk” dresses down the runway, and is now deepening ties with start-ups behind those materials through a $200mn climate-linked fund that counts LVMH as a backer.

McCartney, a sustainability adviser to LVMH, is a founding investor in the Collab SOS venture capital fund that will be managed by New York-based asset management group Collaborative Fund. Her fashion group is also a customer of companies the fund invests in, providing them with revenue.

“I had already developed an R&D relationship with so many young businesses, was giving them orders and then PR-ing them,” McCartney said in her first interview about the fund at her flagship store on Bond Street in London. “Now I’m starting a fund to invest [in them further].”

The Collab SOS fund is focused on early stage materials, energy and supply chain start-ups that have the potential to have an environmental benefit and turn a profit, said Collaborative Fund partner Sophie Bakalar.

It is designed to accelerate the go-to-market timelines of portfolio companies by signing up potential customers, such as McCartney and LVMH.

“We like to invest in companies doing $500,000 to $1mn of revenue per year,” Bakalar said. “Then Stella’s team can come in, scale them up to $3mn-to-$5mn of revenue, de-risk the technology, and at that point hopefully LVMH comes in as a customer, and $5mn hopefully becomes $30mn.”

The fund’s 14 initial investments span start-ups that are beyond fashion materials, such as vertical farms, through the New York-based Square Roots, co-founded by Elon Musk’s brother Kimbal, as well as “carbon negative” cement, through Brimstone Energy, which includes the Bill Gates-backed Breakthrough Energy fund among its early investors.

Biomaterials companies in the fund with a clear application for fashion include Brooklyn-based Keel Labs, which has created a seaweed-based yarn that McCartney believes could be a viable vegan alternative to wool.

Another investment is in Connecticut-based Protein Evolution, a recycling company that is attempting to make plastics, including complex polyester, acrylic and nylon mixes, infinitely recyclable.

To that end, McCartney is handing over leftover polyester and nylon from past collections to Protein Evolution to recycle into “good as new” fibres to be shown in future runway collections.

At present, textile-to-textile recycling at scale relies on chemical recycling, a process in which plastic waste is broken down into chemicals or oils, and has its critics.

It was McCartney who alerted the start-up to the challenges of recycling mixed textile waste in the fashion industry, co-founders Connor Lynn and Scott Stankey said in a phone interview, an area they had not previously explored. 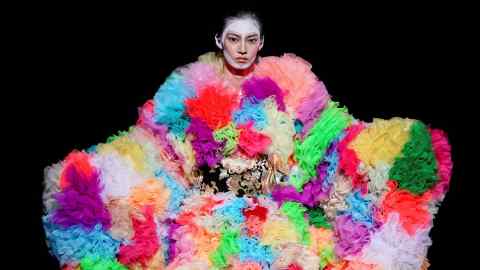 Technology start-ups with a sustainability focus were drawing more investors as the cost of development and risk decreased, said Collaborative partner Bakalar.

“We are now at an inflection point where climate tech is a venture-backable space. And climate is now part of culture in a way it wasn’t a decade ago.”

McCartney said of the Collab SOS model: “We’ll incubate these technologies, I’ll put them on my runway and then, when they’re ready and the price point is right, we can roll it out and I can say, Mr Arnault, let’s do this,” referring to LVMH chief executive Bernard Arnault.

US consumer spending stalls even as inflation eases