Apple’s business is under threat from a widespread coronavirus outbreak in China, with supply chain experts warning of a growing risk of months-long disruption to the production of iPhones.

The US tech giant has had to contend with more than a month of chaos at its main assembler Foxconn’s megafactory in Zhengzhou, China, known as “iPhone City”, following a Covid-19 outbreak that started in October.

Foxconn has moved some of its production to other factories across China, while Apple has worked with components suppliers to alleviate unusually long wait times — about 23 days for customers buying high-end iPhones in the US, according to research by Swiss bank UBS.

As the Chinese government reverses its zero-Covid policy, a longer-lasting risk now looms: the potential of worker shortages at component plants or assembly factories across the country.

“We should be seeing a lot of operations get impacted by absenteeism, not just at factories, but warehouse, distribution, logistic and transportation facilities as well,” said Bindiya Vakil, chief executive of Resilinc, California-based group that tracks more than 3mn components to provide supply chain mapping services.

Apple warned on November 6 of “significant” disruption ahead of the holiday season. The rare statement came less than two weeks after executives forecast subdued sales growth in the crucial period around Christmas, of below 8 per cent.

The consensus among analysts is that company revenues this quarter will fall just below the record $123.9bn it achieved over the same period last year, with net profits projected to tumble more than 8 per cent, according to bank estimates pooled by Visible Alpha. That would break a 14-quarter revenue growth streak as Apple experiences a shortage of between 5mn and 15mn iPhones.

Many analysts had initially raised forecasts for the following six months, assuming that unfulfilled orders would be postponed rather than cancelled.

But the risks to Apple’s revenues for 2023 have increased as modelling has shown 1mn Chinese people are at risk of dying from Covid during the coming winter months after President Xi Jinping removed strict pandemic controls. One Apple store in Beijing’s main shopping district had to cut hours last week because all its workers were sick.

A fifth of Apple’s revenue comes from sales in China, while more than 90 per cent of iPhones are assembled there. Smartphone rival Samsung exited China in 2019 and has diversified assembly in at least four countries.

Horace Dediu, independent analyst at Asymco, a consultancy, said Apple’s production and operational woes in recent months could be followed by a demand crisis in China as consumers reprioritise spending habits.

“Though the rest of the world saw demand rise during lockdowns, it was due to work-from-home and stimulus,” Dediu said. “With low immunity and minimal safety nets, Chinese consumers could hunker down and avoid big purchases next year.” 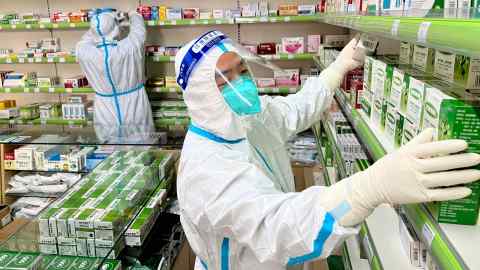 Apple’s most important Taiwanese suppliers including Foxconn, Pegatron and Wistron have responded by seeking to expand their nascent Indian operations.

Prabhu Ram, head of industry intelligence group at CyberMedia Research in Gurgaon, India, estimated that upwards of 7-8 per cent of iPhones are being assembled in India, and predicted the big three Taiwanese suppliers were targeting 18 per cent of iPhone assembly to be in India by 2024.

China’s attempt to stamp out the disease rather than manage it has left the country’s assembly lines exposed, said Alan Day, chair of State of Flux, a London-based supply chain consultancy that has been working with the UN on corporate standards for responding to Covid outbreaks.

“The next two to six months really will be a defining moment for Apple’s supply chain, because of China’s immaturity of handling Covid,” Day said. “The rest of the world has developed standards, but China has been almost non-existent in getting companies to embrace those standards.”