BlackRock has pulled in much more money from US retail investors than its rivals so far in 2022, even as the world’s largest asset manager has come under attack from both the left and right over its approach to sustainable investing.

BlackRock’s mutual funds and exchange trade funds collectively had positive retail flows in nine of 11 months and ended up with $144bn in net new money at the end of November, according to Morningstar data.

Vanguard, the second-largest asset manager, said its personal investor clients added $22bn in new cash over the same period. The broader industry had net outflows of $138bn, and Fidelity suffered small outflows, according to Morningstar.

BlackRock’s positive numbers are due to its iShares index funds, which drew in $152bn, enough to outweigh $8bn in outflows from its BlackRock branded funds, which are a mix of active and passive. Morningstar calculates that BlackRock is on track to gather more new retail money than Vanguard for the first time since 2007.

The net inflows continued even as Republican politicians stepped up their attack on BlackRock over the use of environmental, social and governance factors in investing. Contending that the firm was hostile to fossil fuel, Republican states have pulled more than $3bn in funds from BlackRock and North Carolina’s treasurer has called for the ouster of founder Larry Fink from his role as chief executive.

On Thursday, Texas lawmakers held a hearing at which they excoriated BlackRock’s head of external affairs, over the group’s prodding of companies to cut carbon emissions and avoid risks associated with climate change.

State senator Bryan Hughes took particular issue with BlackRock’s decision to vote its shares in ExxonMobil, the Texas-based oil company, in favour of replacing three board directors with candidates nominated by activist hedge fund Engine No. 1. “We wish BlackRock did not have such a big stake in Exxon to push them around, bully them and vote against oil-and-gas exploration — vote against energy that Americans and Texans need,” Hughes said.

Democratic politicians for their part have lashed out at Fink and BlackRock for failing to do more to fight climate change, and a UK activist fund has called for his resignation over alleged “hypocrisy”. 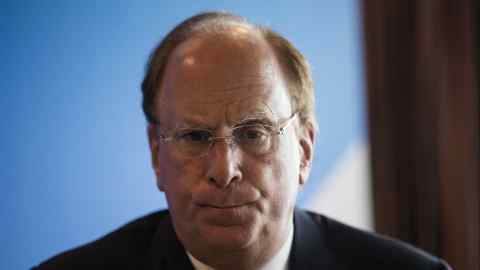 The inflows come despite a grim year for the broader markets in which equity and bond prices tumbled, dragging down assets under management for the entire money management industry. BlackRock’s total AUM dropped 20 per cent to $8tn as of the third quarter and across the entire mutual fund and ETF industry assets fell 17 per cent to $28tn at the end of October, according to the Investment Company Institute.

Martin Small, head of BlackRock’s US wealth advisory business, said the money manager had benefited from the fact that its funds are exclusively marketed through financial advisers rather than directly to retail customers.

“Our strategy for the better part of a decade is to be a whole portfolio provider and make it easier for financial advisers to build great portfolios,” Small said. “These are real relationships we have with financial advisers who we speak with directly. It’s not the first time they have seen co-ordinated campaigns against the financial services industry. They understand that tides ebb and flow.”

Vanguard said in a statement: “Investors continue to adopt low-cost index ETFs as their vehicle of choice for broadly diversified exposure to the stock and bond markets.”

Fidelity said: “We are proud to help customers of all ages and from all life stages meet their investment goals of retirement, college tuition, philanthropy, etc. and are therefore redeeming.”

“Despite market declines that impacted our asset levels, Fidelity continued to experience customer growth and strong business results,” it added, noting that the number of retail accounts was up 11 per cent year on year.

What will UK growth data reveal about consumer spending power?

Where to park a lump sum