When a company tells its shareholders it expects to make €9bn of losses over the next five years that will more than wipe out all its provisions and equity, it would usually trigger an existential crisis. The normal rules do not appear to apply to the Belgian central bank.

The National Bank of Belgium’s warning — which included the scrapping of its main dividend payment this year — did cause its shares to fall about 18 per cent last week. But it still was able to reassure investors that its financial woes “would not call into question its stability”.

“After all, a central bank can continue to operate, at least temporarily, with a negative capital position,” said the 172-year-old institution, which is one of the 19 national central banks that share the euro and are the main shareholders in the European Central Bank.

With central banks around the world raising interest rates sharply to tackle soaring inflation and unwinding their massive bond purchases, economists expect many of them to make sizeable losses as they now have to pay more in interest to commercial banks than they earn from other areas.

Central banks across the euro area will have to pay about €70bn of interest on the deposits of commercial banks next year, according to an estimate by Frederik Ducrozet, head of macroeconomic research at Pictet Wealth Management. That sum is far larger than recent years as a result of the ECB’s aggressive monetary easing from 2014-21, when negative rates meant lenders paid to deposit money at the central bank.

The scale of the payout on deposits will drag many eurozone central banks into the red, Ducrozet warned, adding that some “could face growing political pressure to be recapitalised”.

Some think this will only amount to a “storm in a teacup”, as Danske Bank strategist Piet Haines Christiansen said, pointing out that central banks do not aim to make profits and cannot go bust when they have the power to print money, earning revenue on the production of currency through a process called seigniorage.

Several central banks have already fallen into negative equity in the past without it causing big problems, including those in the Czech Republic, Sweden, Chile, Israel and Mexico.

However, others warn that rising losses could have several unwelcome side effects. Most monetary authorities are nationalised. And a portion of their profits — including Belgium’s, which is 50 per cent state-owned — have been paid to finance ministries.

Lower dividends from central banks will, therefore, hit public finances. If the losses get too big, they may need state bailouts that risk increasing political pressure and threatening their independence.

“Whether that will ultimately imply loss of independence is hard to say,” said Sandra Philippon, chief economist at Dutch bank ABN Amro. “Of course, recapitalisation from states does not help [central banks] to be more independent.”

For the past decade, eurozone central banks have been making healthy profits, totalling about €300bn between 2012 and 2021, thanks mainly to income on the bonds they bought during this time and the negative interest earned on commercial bank deposits.

While part of these profits went to national governments, they also used a big chunk to build up reserves that could absorb losses as they unwind their ultra-loose monetary policies.

These buffers are coming into play since central banks started raising interest rates sharply. The ECB, for instance, said it and the 19 national central banks in the euro area had built up €116bn of provisions and €116bn of reserves and capital, adding “our net equity is substantial enough to withstand potential shortfalls”.

Some central banks are also suffering losses on the large bond portfolios acquired over recent years. The Reserve Bank of Australia recently announced an A$37bn ($25bn) accounting loss on its pandemic bond purchase programme, leaving it with a negative equity position of A$12bn.

The UK’s Office for Budget Responsibility estimated that the Bank of England would need to be paid £133bn by the government over the next five years to cover losses on its quantitative easing portfolio. 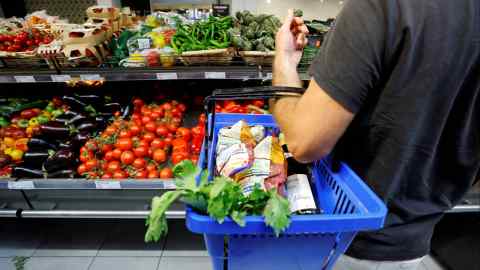 Some central banks have also invested their own funds in securities, exposing them to losses after they fell in value. An extreme example is the Swiss National Bank, which warned in October that it had already made a record loss of SFr142.4bn ($152bn) in the first nine months of this year, mostly from losses on its investments made with its foreign exchange reserves.

Big central banks, such as the ECB and the US Federal Reserve, can deal with any negative equity by accumulating a “deferred asset” until they return to profitability, which would allow them to avoid a state bailout.

Yet such a scenario would be uncomfortable, especially when the ECB has been publicly critical of other European central banks, such as the Czech National Bank, having negative equity. It would also come at a time of mounting political criticism from politicians over monetary policy’s response to soaring inflation.

“Particularly in a situation in which central banks are trying hard to restore their credibility as inflation fighters, negative equity would be counterproductive,” said Carsten Brzeski, head of macro research at Dutch bank ING.