The UK’s rate of inflation hit a fresh 41-year high in October, accelerating to 11.1 per cent on the back of rising energy and food prices.

The Office for National Statistics said the rate rose from 10.1 per cent in September, putting inflation at its highest level since October 1981. Economists in a Reuters poll had expected a rate of 10.7 per cent.

The sharp rise in the cost of living came despite the government’s energy price guarantee, which capped bills for gas and electricity at £2,500 for a household with average usage of both fuels.

Food price inflation rose sharply to 16.5 per cent on an annual basis, the highest for 45 years, according to the ONS.

“Rising gas and electricity prices drove headline inflation to its highest level for over forty years, despite the energy price guarantee,” Grant Fitzner, chief ONS economist, said in the ONS statement on Wednesday. 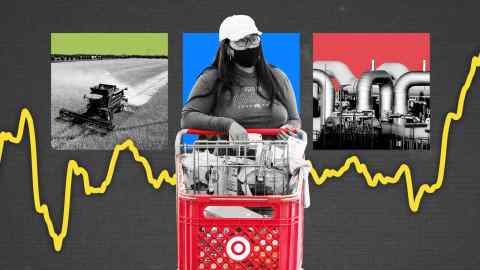 “Over the past year, gas prices have climbed nearly 130 per cent while electricity has risen by around 66 per cent,” he added.

The one bright spot in the figures was that core inflation, excluding food and energy, held steady at 6.5 per cent in October, the same rate as in September.

Chancellor Jeremy Hunt blamed Russia’s invasion of Ukraine for the deepening cost of living crisis, but pledged to take “tough but necessary decisions on tax and spending” in Thursday’s Autumn Statement to help bring inflation down.

“We cannot have long-term, sustainable growth with high inflation. Tomorrow I will set out a plan to get debt falling, deliver stability, and drive down inflation while protecting the most vulnerable,” Hunt said.