Baillie Gifford, one of the world’s top tech investors, has warned fast-growing private companies face a reckoning next summer.

And the £228bn Edinburgh-based asset manager says it is “not ready to give up on China”.

Peter Singlehurst, its head of private companies, told a conference on Wednesday that previous market cycles showed there was typically about 18 months between peak euphoria in the market and the peak frequency of down rounds.

“That would lead you to estimate that the peak frequency of down rounds will be in the middle of next year,” he said.

The technology-heavy Nasdaq index has dropped more than a third this year as investors adjust to a regime change of rising interest rates. That decline is largely yet to be reflected in the private markets and Singlehurst said this would not happen until companies run out of cash and have to raise money again at a reduced valuation.

“It will come,” he added, describing it as “a gravitational force [that] even the best private companies won’t be able to escape”.

Singlehurst told the Financial Times Future of Asset Management event in London that Baillie Gifford’s portfolios had “already taken that reckoning because we mark all of our private holdings to market”. This is because they are held in daily-priced funds such as the FTSE 100-listed Scottish Mortgage Investment Trust, and the £642mn Schiehallion Fund, which is managed by Singlehurst.

This year Scottish Mortgage’s share price is down more than 40 per cent and the Schiehallion Fund’s shares are down two-thirds.

Baillie Gifford made its first investment in an unlisted company in 2012, in Chinese ecommerce group Alibaba, and since then has scaled up its investment in private companies.

Foreign investors are weighing up their exposure to China amid moves by president Xi Jinping to tighten his grip on power, a release of disappointing economic data and hopes of a rapid relaxation of Covid-19 rules. In the past, critics of Baillie Gifford have questioned whether it had underestimated the political risk of investing in the country.

Singlehurst said: “We don’t invest in China, we invest in a small number of companies in China.” 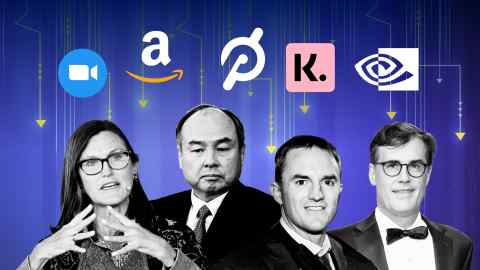 He added: “The more pressing question for us in China is will the best Chinese businesses continue to raise capital from foreign investors?”

Baillie Gifford is “not ready to walk away from China at all”, he added. “We want to keep looking to see if we can continue to find great businesses because it will be those handfuls of exceptional companies that will matter for us and our clients, not China writ large.”

The largest position in the Schiehallion Fund is Elon Musk’s SpaceX rocket business. Investors are debating whether the billionaire’s recent acquisition of social network Twitter will be a distraction from his other companies such as SpaceX and electric carmaker Tesla.

“If there’s one thing that Elon Musk has always been quite good at, it’s juggling lots of plates,” Singlehurst said. “Arguably he’s always been distracted from everything he’s done and yet he’s been able to generate returns for shareholders over long periods of time despite those distractions.”

The “important thing,” he added, is the people around Musk: there’s “an excellent management team at SpaceX that has been unbelievable from an executional perspective”.