When Federal Reserve officials last met to set US monetary policy, chair Jay Powell made it clear that a recession in the world’s largest economy could not be ruled out.

“No one knows whether this process will lead to a recession or if so, how significant that recession would be,” he said at the press conference after the Federal Open Market Committee’s gathering in September.

As the Fed convenes this week, inflation remains at the highest level in decades and is becoming more embedded, meaning policymakers are set to ratchet up their response and implement the fourth 0.75 percentage point increase in a row while also signalling more tightening ahead. Economists warn that means a more severe downturn is on the cards.

“Each adverse [inflation] report and each adverse development in the outside world implies the Fed is going to have to do more in order to bring the situation under control,” said David Wilcox, a former Fed staffer who now works at the Peterson Institute for International Economics.

He added: “Doing more means a higher probability of a recession, and if [it] happens, in all likelihood a deeper recession.”

Since the Fed’s last meeting, there have been signs that the housing market is weakening while consumer demand has started to soften, but fresh inflation data has shown price pressures continue to build and labour costs have firmed.

Most alarmingly, the October consumer price index reported an acceleration in “core” inflation, which strips out volatile items such as food and energy. Inflation had spread from industries hobbled by pandemic-related supply chain disruptions and the war in Ukraine to categories such as services.

Sonal Desai, chief investment officer at Franklin Templeton Fixed Income, described this “migration” as a problem “a bit like whack-a-mole, with a different piece of the basket popping up with inflation pressures”.

She added: “The reality is we are going to need to see some slowdown in the economy to take some of that demand-side pressure off.”

Another 0.75 percentage point increase this week will lift the federal funds rate to a new target range of 3.75 to 4 per cent, a level that policymakers think will start to have a bigger impact on economic activity.

In September, when FOMC members and branch presidents last published forecasts, most saw the benchmark policy rate hitting 4.4 per cent by the end of the year before peaking at 4.6 per cent in 2023.

But given the economic data that has been published since then, many economists and traders betting on fed funds futures now think the rate will probably top out at a “terminal” level of 5 per cent.

“The higher the terminal rate, the greater the window for all borrowing costs to continue to rise, [which] does suggest the growing risk of quite a severe downturn,” said James Knightley, chief international economist at ING.

Knightley is among a growing cohort of economists and policymakers to question whether the central bank should consider slowing the pace of its rate rises. “By moving hard and fast, you just naturally have less control,” he said.

But easing up when inflation is this severe could result in a repeat of communications problems that Powell was forced to rectify in August.

Over the summer, the Fed’s declaration that it would need to slow the pace of rate rises “at some point” fuelled bets the central bank was losing the stomach for the fight against inflation and might start cutting rates next year. Markets rallied sharply, undoing some of the work that the central bank had accomplished in ushering in tighter financial conditions.

Mohamed El-Erian, chief economic adviser at Allianz, said: “On the one hand, it should moderate the pace to see how the massive recent front-loading of hikes plays out in the real economy and for financial stability. On the other hand, it can ill-afford another blow to its inflation-fighting credibility.” 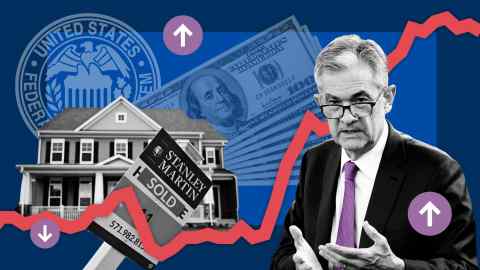 Priya Misra, global head of rates strategy at TD Securities, said one “graceful” way for the Fed to slow down without stoking scepticism about its commitment would be to indicate support for a higher “terminal rate” while also homing in on financial stability concerns.

Those vulnerabilities became evident in the UK last month when government bond markets seized up and tipped pension funds into turmoil, forcing the Bank of England to intervene.

A moderation in the pace of policy tightening to half-point increments would be welcome news to some Senate Democrats, mostly on the left of the party, who have recently stepped up their criticism of the Fed and warned of excessive job losses in the future.

But for now at least policymakers seem more concerned about doing too little rather than too much to fight inflation.

“What’s at stake if they make the wrong call is that inflation stays higher, and that means at some point down the road they’ll have to do even more to get inflation back to 2 per cent,” said Steve Blitz, chief US economist at TS Lombard.