China’s introduction of trade sanctions on some Australian products in 2020 has resulted in unexpected benefits, with the latest economic statistics showing exports booming for the resource-rich country as it has been forced to shift its focus to other markets.

Australia’s trade figures have also been improved by Chinese dependence on critical products, notably iron ore, wool and natural gas. They were spared the punishment of new tariffs, with increased demand boosting their sales.

The country’s long record of economic growth had looked vulnerable when China introduced punitive tariffs and controls on an array of Australian imports two years ago, as political tensions between the two countries intensified.

The measures, introduced after Australia’s then prime minister Scott Morrison called for an inquiry into the origins of Covid-19, threatened to weaken its economic resilience.

Even after the imposition of sanctions, China was the destination for more than 42 per cent of its exports in 2021 compared with only 14 per cent in 2007, as demand for iron ore and other minerals and fossil fuels, as well as consumer goods, grew rapidly, according to the Australian Strategic Policy Institute think-tank.

“Australia had not been as dependent on a single market since 1938, when that was the ‘mother country’ of the United Kingdom,” said David Uren, a senior fellow at ASPI. For the first time in its history, it was dealing with a situation where its largest trading partner had become an adversary, he said.

At the same time, victims of the sanctions included barley growers supplying the brewers that make Tsingtao beer, beef farmers and the lobster industry. Luxury wine producers, who charged Chinese consumers premium prices, and coal miners, whose product was left stranded on ships off the Chinese coast for months, were also hit. 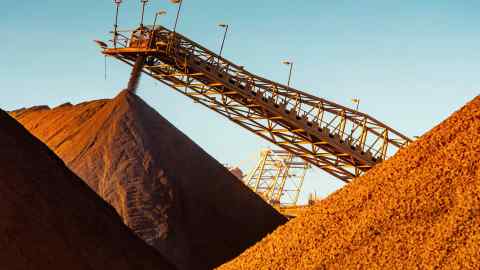 The drop in the value of exports is partly due to a falling iron ore price — Australia’s biggest export, with Chinese demand for the steelmaking resource boosting the country’s largest companies, including BHP, Rio Tinto and Fortescue. But trade is also brisker with other Asian countries. Excluding Japan, a traditional trade partner for Australia, South Korea, India and other ASEAN countries now account for more than a third of the country’s exports.

“The Chinese economy cannot wean itself off iron ore. It is a bedevilling situation for them,” he said. Australia exported A$175bn worth of iron ore to China in 2021, according to the Lowy Institute.

Meanwhile, some Australian companies have been able to maintain exposure to the lucrative Chinese market. Treasury Wine Estates, one of the world’s largest wine producers, was hit hard by the imposition of a 175 per cent tariff on Australian wine that wiped out sales of its luxury Penfolds brand in its most profitable market.

Over the next two years, TWE’s sales of Penfolds boomed in Singapore, Hong Kong and Taiwan. Yet it has not given up on mainland China. It has begun exporting French-made Penfolds to China and has now launched a Chinese version of Penfolds, using grapes grown in the Ningxia and Shangri-La provinces.

“We’ve said since the day tariffs were put on us that we weren’t walking away,” Tim Ford, chief executive of TWE said, arguing that the trade and political aspects of the Australia-China relationship were “quite divorced”.

In another example, Bubs, an infant formula maker based in the Melbourne suburb of Dandenong, has benefited from a massive expansion into China since 2008, where its products have sold well.

Its chair Dennis Lim said its product is a ‘staple’, so banning it or applying sanctions would have had ramifications within China. “They might ban lobster, but you can’t ban infant formula,” he said.

Don Farrell, Australia’s trade minister, said this month that his government had extended an “olive branch” to China to discuss “trade blockages”, but he added that the dispute had shown that the country had “put all of our eggs in the China basket”.

Australia still remains vulnerable to further action by China if geopolitical relations continue to sour. A report by the Lowy Institute pointed to the country’s coal industry relying on Chinese banks for finance.

Richard McGregor, senior fellow for East Asia at the Lowy Institute, said Australia’s economic resilience had been encouraging, but its longer-term prospects may be less promising.

“Given the enduring geopolitical rivalry between the US and China, and Australia’s position as a strong US ally, Canberra should assume that Beijing will continue punitive trade measures in one form or another,” he said.