Five Things for Clients to Consider When Moving


Like any major life decision, a client’s decision to uproot themselves (and potentially their family) and move from one state to another isn’t an easy one. Although laws, taxes and climate are the primary focus, there could be many more considerations depending on your client’s family’s needs and desires. Whatever the reason, it’s important to provide clients with as much information as possible as to the “why” and the “how” when it comes to leaving one jurisdiction for another.

Here are five considerations for client’s contemplating making a move.

Related: Moving to a Low-Tax State Can Be an Expensive Way to Save Money

1.The Current Landscape and Domicile vs. Residency.

Before moving, clients need to distinguish between state factors and federal standards across jurisdictions. Every U.S. citizen living domestically starts at the same point, with an estate tax exemption of $12.06 million (in 2022). Every dollar a client has in their estate over that amount is taxed at a 40% rate. Married couples have double this amount and have “portability” options —one spouse’s unused exemption can be “ported” over for the other spouse to use.

Related: The 15 U.S. Cities Gaining and Losing the Most Millionaires

With the federal framework in mind, clients need to consider that each state has its own rules regarding the income tax rate and estate tax (exemption amount and rate). For example, Illinois has an estate tax exemption of $4 million and a graduated estate tax rate up to 16%. Illinois also has its own flat income tax rate of 4.95%. Illinois’ income tax rate is actually middling (other notable states: California at 13.3%, New York at 10.9 %, Florida, Texas and Nevada all at 0%). The estate tax exemption for Illinois is also middling compared to states that have exemption amounts and/or rates (that is, Oregon’s exemption is $1 million, Washington’s is $2.2 million, New York’s is $6.1 million), but note that less than half the states have their own estate tax. All states in the south and most in the west don’t have a separate estate tax.

Another key consideration in a move across jurisdictions is “residency” and “domicile” and how they differ. “Residency” is more of an objective standard. Residency is, put simply, where your client is located. “Domicile” is a more subjective standard. Domicile is the place where your client intends to permanently reside until some unexpected event occurs that induces an adoption of a different permanent residence. Once established, domicile remains unchanged until a new domicile is effectively established. Put more broadly, an individual can have multiple residences but only one domicile. Both residency and domicile are important when evaluating income tax and estate tax considerations and consequences when leaving one jurisdiction for another.

2. How to Move Domicile.

Another easy step to take when changing domicile is to cease claiming a homestead exemption in the former state. First, an individual must establish a personal residence in their new state. Although not required, it would be a best practice to consider selling their residence in their former state. Where they claim their homestead exemption is an important factor in demonstrating intent. You only get one bite at the “tax apple.” Additionally, the individual needs to file a declaration of domicile in their new state. Not all states have a declaration of domicile form, but for states that do (that is, Florida), it’s such an easy step worth taking.

There’s a laundry list of other factors to consider when changing domicile, including:

Applying income tax to individuals is relatively straightforward. For example, Illinois applies income tax to the entire net income of an Illinois resident and the Illinois-sourced income of a non-resident. Illinois presumes Illinois residency if your client claims a homestead exemption on Illinois property and/or if your client spend smore time in Illinois than any other state. Note these presumptions are just presumptions and not determinative of domicile or intent.

Income taxation of trusts can be more flexible. As a threshold matter, an Illinois trust will pay income tax on its entire income, regardless of the source of said income. An Illinois trust includes: (1) a trust created by the will of a decedent who was domiciled in Illinois at death and (2) an irrevocable non-grantor trust of which the grantor was domiciled in Illinois at the time the trust became irrevocable. Note that grantor trusts are taxable to the individual and would flow accordingly based on the individual income tax rules noted above. The situs of a trust may be dependent on the location of the trustee, other fiduciaries and/or the beneficiaries.

Estate tax as it pertains to individuals is similarly relatively straightforward. For example, Illinois estate tax may be imposed on taxable transfers of property sitused in Illinois. Illinois-sitused property includes all property if the decedent was an Illinois resident at the time of death. If the decedent was a non-resident at the time of death, then transferred Illinois-sitused property includes the real and personal property located in Illinois.

In the estate tax context, trusts may be similar to individuals because a trust can have only one situs, essentially the equivalent of having one domicile. Several factors may be looked to when determining a trust’s situs, including:

The terms of the trust instrument can go a long way toward preventing an examination of the other factors. It’s typically recommended that a trust instrument specify a trust situs, rather than relying on a “floating situs,” that is, the trust situs being “where the trust is being administered.” Opting for a “floating situs” opens up the possibility of a more critical examination of the other factors, which may prove more complicated.

Trusts, like individuals, can change trust situs over time. Importantly, changing trust situs should be done formally. Similar to an individual proving domicile (or non-domicile), documentation helps support the tax position and avoids potential disputes. Changing trust situs can be done in different ways, depending on the state and applicable laws. Changing trust situs is a common objective of nonjudicial settlement agreements (agreement among fiduciaries and beneficiaries pursuant to state law), but can also be accomplished via decanting (distribution from a current trust to a new trust with more desirable terms) or a trustee power granted by the trust instrument and/or state law.

Differences in trust situs are important not only from an income tax and estate tax perspective, but also for other trust administration rules. This includes accounting rules, fiduciary responsibilities, directed trust provisions, the rule against perpetuities and asset protection.

Irrevocable non-grantor trusts (INGs) present a unique opportunity for income tax. The goal of an ING is to shift income away from a high-income tax state to a zero-tax state. For example, a California resident (13.3% income tax rate) could establish a Nevada ING (or NING), which has a no state income tax. As the name says, an ING is a non-grantor trust — this ensures that trust income isn’t taxed by the grantor’s home state. Recall that a grantor trust taxes income directly to the grantor, which would derail this strategy before it even became useful. Note: INGs don’t prevent the grantor’s home state from taxing “source” income for assets sitused in the home state.

An ING is also an incomplete gift trust, which allowed the trust to be funded without gift tax implications. However, trust assets will be included in the grantor’s gross estate for federal estate tax purposes. This illustrates that the use of INGs is an income tax-based strategy, not an estate tax-based strategy. Additionally, an ING is structured as an asset protection trust, which prevents the trust from being invaded by creditors. The asset protection trust element is also necessary to avoid grantor trust status. When using INGs, a good estate planner must be cognizant to “thread the needle” which is Internal Revenue Code Section 677. IRC Section 677 provides that if the grantor or the grantor’s spouse can receive distributions of income from a trust, then the trust is deemed a grantor trust. The ING, however, falls within an exception to Section 677, which provides that the grantor and/or the grantor’s spouse may receive distributions of income without the trust being deemed a grantor trust if a distribution of income requires the consent of an “adverse party” (that is, another beneficiary). A common method to thread this needle is to bifurcate the fiduciary roles, for example, into a “Distribution Trustee” an “Investment Trustee” and an “Administrative Trustee.” 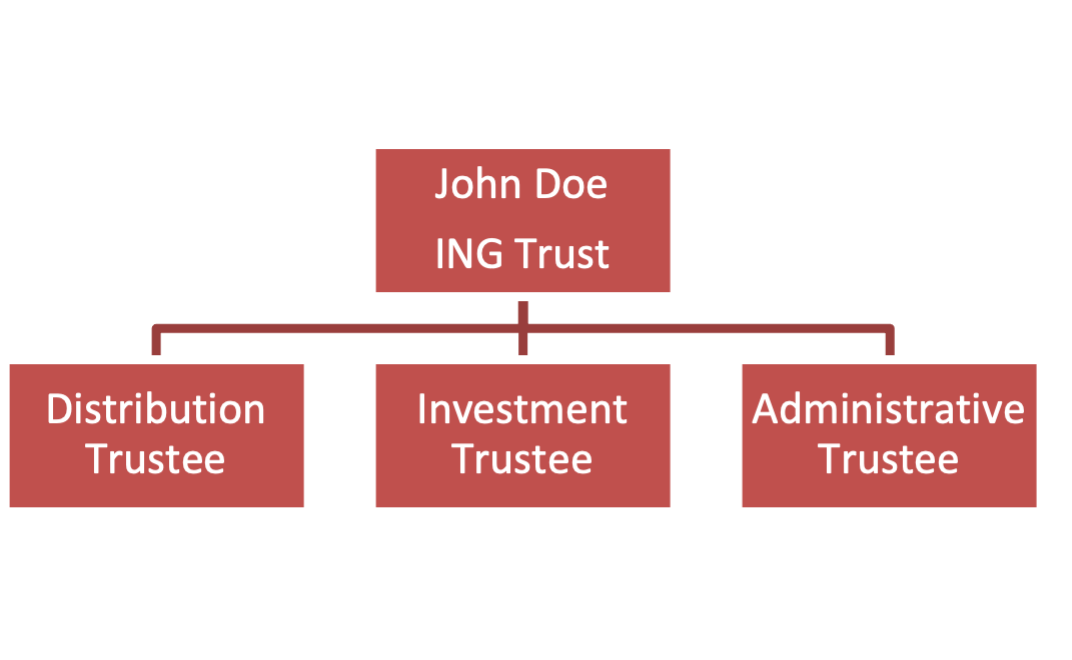 Consider “Joe.” He’s a California resident and has a $10 million portfolio of low-basis stock ($1 million). If Joe does no planning and sells his entire portfolio, Joe will realize $9 million in long-term capital gain and be taxed as follows:

Now suppose Joe makes an incomplete gift to a NING and the NING thereafter sells the entire portfolio. The tax consequences are as follows:

The use of the NING in this example saved the client $1.2 million.

Proving that brokers are better