Skydance Media, the Hollywood production company behind the blockbuster Top Gun: Maverick, has received a cash injection of $400mn led by KKR.

The investment, which also included existing shareholders the Ellison family, RedBird Capital Partners and Tencent, gives Skydance a valuation of more than $4bn. The funding will back new initiatives in sports and interactive entertainment, and help build the company’s fledging animation division.

The capital injection comes as the public market capitalisations of major media groups, including Netflix, Warner Bros Discovery and Disney, have experienced sharp declines. After a few heady years when private equity and other investors flocked to assets exposed to the entertainment business, the mood has shifted sharply because of concerns about the cost and growth potential of the streaming video business.

But despite the industry gloom, Skydance has enjoyed a strong run this year, with the launch of its first animated feature for Apple TV Plus and the success of Top Gun: Maverick, which has raked in more than $1.4bn at the box office and become the fifth highest-grossing film in the US. People close to the investment note that the fundraising began before it was clear Top Gun would break box office records.

Founded in 2010 by David Ellison, son of billionaire Oracle co-founder Larry Ellison, Skydance has expanded from films into gaming, television production and animation. The Ellison family remains the largest shareholder in the company. KKR’s previous media and entertainment investments include ByteDance, Epic Games and Axel Springer.

“We look forward to supporting the Skydance team as they continue to build their business across TV, film, animation, gaming and sports,” said Ted Oberwager, who leads gaming, entertainment, media and sports for KKR’s Americas group.

Besides Top Gun, Skydance has backed a number of other film franchises, including two Mission Impossible sequels, Star Trek Into Darkness and Jack Reacher: Never Go Back. 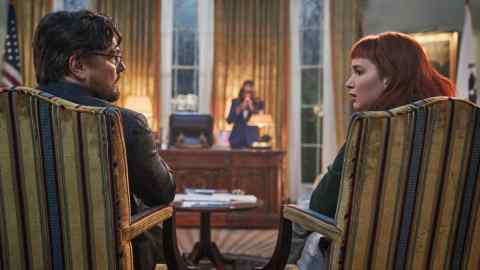 This summer, Apple TV Plus released Skydance’s Luck, its first animated feature film, which was co-produced by former Pixar executive John Lasseter. Skydance has been moving aggressively to build the animation group, which is the largest division at the company with 900 staff. The move puts the independent company in direct competition with animation heavyweights such as Disney, DreamWorks, Illumination and Pixar.

The company also sells content to the major streaming companies, including Netflix, Amazon and Apple. Its show Grace and Frankie was the longest-running show on Netflix.