Huawei, the Chinese technology group, is planning to relaunch 5G phones as soon as next year to overcome the stranglehold of US sanctions and win back market share.

The company is blacklisted by Washington from acquiring US technology for 5G smartphones but has been developing strategies to bypass the sanctions, according to three people familiar with the matter.

One approach is to redesign its smartphone without using restricted advanced chips, said two people familiar with the company’s plans. Huawei used to produce Kirin chipsets designed by HiSilicon and manufactured by leading chipmaker Taiwan Semiconductor Manufacturing Co before the US tightened restrictions.

Huawei, a Chinese national champion caught by rising geopolitical tension between Washington and Beijing, is working to reclaim lost market share after its sales plunged following the imposition of US sanctions in 2019. Revenues from its smartphone-led consumer business fell 50 per cent year on year in 2021.

“This company cannot wait endlessly and needs to bring 5G phones back to the market as soon as possible,” said one person familiar with Huawei’s plans.

“Huawei has lost its leading position in the mobile phone market to American sanctions years ago. Now even their domestic market share keeps dwindling.”

Another sanctions workaround that Huawei is considering is collaborating on a phone case product which enables 5G, according to two people briefed on the matter.

There are already phone cases on the market. One case, developed by Shenzhen-listed company Soyea Technology, has a built-in eSIM module with chips that support a 5G connection.

Within weeks of Huawei launching its Mate 50 series in September, China Telecom, a Chinese state telecom group, began to sell the phone with the cases. This year, Soyea also launched phone cases for Huawei’s P50 Pro.

“The company is trying its best to appeal to users at a time when the consumer market is weak,” said a Shanghai-based tech analyst, who asked to remain anonymous for fear of repercussions.

Huawei’s quest to overcome the US restrictions and reclaim its position as the world’s biggest smartphone vendor is a matter of national importance to Beijing as it works to develop technological self-sufficiency, said analysts.

“China’s technology self-sufficiency plan could be a potential driver in helping Huawei to join the 5G competition,” said Will Wong, a Singapore-based analyst at research company IDC.

But as long as the US sanctions are in place, Huawei is at a severe disadvantage, experts said.

“It would take Huawei so long to build up internally or externally the supply chain it needs to pull this off from that we’ll probably be in the 6G era before this can be done,” said Douglas Fuller, an expert in China’s semiconductor industry.

The sanctions have frustrated Huawei’s plans to take on Apple. Richard Yu, chief executive of Huawei’s consumer business group, admitted in a July media interview that the group was “the only manufacturer selling 4G phones in the 5G era”, which he said was “a joke”. 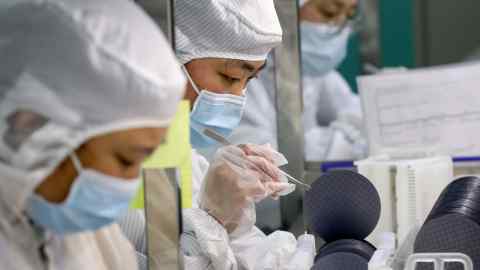 Customers in China have started pushing back against the high price tag of Huawei’s phones lacking 5G services.

“In just a week [after Huawei launched Mate 50], hundreds of people have approached me to modify their Mate 50 so that it can support 5G networks,” said Michael Li, owner of a Shenzhen-based repair shop.

Some customers even brought in their Mate 40, a previous generation Huawei 5G phone, and asked if Li could put old phones’ chips into the new one. “Of course, that is beyond my ability.”

Huawei did not immediately reply to a request for comment.