A rebellion against the status quo of the global financial architecture dating to the second world war gathered momentum in New York this week as developing world and climate leaders demanded action to help them deal with climate change.

In closed-door meetings on the sidelines of the UN General Assembly, and so-called climate week discussions alongside, wealthy countries were confronted by increasingly urgent questions about who pays for the catastrophic impact of hurricanes, floods and wildfires.

Mia Mottley, the prime minister of Barbados, who has become the de facto leader of efforts by smaller, less wealthy nations to build a global coalition to secure funds to help tackle the ravages of climate change, called on Friday for “a new internationalism”.

The postwar financial institutions established as a result of the Bretton Woods agreement in 1944, including the IMF and what became the World Bank Group, “no longer serve the purpose in the 21st century that they served in the 20th century”, Mottley said.

The multipronged actions demanded from the IMF and World Bank included the redistribution of $100bn in special drawing rights, or extra foreign reserve assets; a requirement for the IMF to temporarily suspend interest surcharges for heavy borrowers in need of funds; and concessional funding to be provided for infrastructure related to climate resilience.

The plans Mottley put forward included the issuance of $650bn of special drawing rights or other low-interest, long-term debt instruments to finance clean-energy development across the world. All major issuers of debt should “normalise” natural disaster and pandemic clauses in debt instruments to help borrowing countries better absorb the shocks, she said.

Mottley was not the only leader to push for a rethink of how the world pays for the effects of climate change. Earlier in the week, fellow Caribbean Philip Davis, the prime minister of the Bahamas, said the IMF and World Bank should “revisit” their recommended debt-to-GDP ratios for borrowing countries “in the context of adaptation, mitigation, loss and damage, particularly, as a result of climate change”.

Davis pointed out that “vulnerable countries” were “far above” the debt-to-GDP ratio recommended as sustainable by multilateral development banks, but they still had to pay to rebuild after natural disasters.

Simon Stiell, newly appointed executive secretary of the UN Framework Convention on Climate Change, told the FT there was “growing consensus” that the so-called Bretton Woods structures were “appropriate for the postwar world” but now needed to be “reformed and adjusted”.

Critically, US climate envoy John Kerry on Wednesday said he had also been pushing for reform of international financial institutions over a failure to marshal funds related to climate change. He said the need for an overhaul had been discussed at a leaders’ roundtable organised by the UN that day.

The US is the largest shareholder in both the IMF and the World Bank, regarded as a laggard in financing climate change action under its president David Malpass, who drew fire this week after repeatedly failing to answer directly a question about his acceptance of climate change science.

Kerry expressed frustration about the role of the institutions that provide loans and grants to poorer countries and are seen as crucial to distributing money to help limit global warming as developing economies grow. 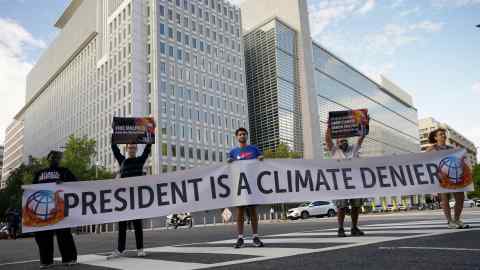 The discussion comes as part of a fraught broader debate around so-called “loss and damage”. At the COP26 UN climate summit in Glasgow last year the rich countries that represent the bulk of historical global greenhouse gas emissions rejected a proposal by the world’s poorest countries to create a new facility to help pay for the damage from climate change.

Vanessa Nakate, a Ugandan climate activist, told the Financial Times this week that there should be more finance available to help developing economies shift from fossil fuels for energy and adapt to climate change, and that it should take the form of a loss and damage facility.

“International climate finance needs to help the global south, who do not have the resources to pay for the clean energy transition,” said Nakate.

During the week, Denmark became the first country in the world to offer loss and damage compensation to countries affected by climate change, pledging around $13mn of support.

UN secretary-general António Guterres has called for governments to impose a windfall tax on oil and gas company profits and redistribute the proceeds to countries harmed by climate change.

Kristalina Georgieva, IMF managing director, said on Tuesday that demands from developing and climate-affected countries for developed countries to help pay for loss and damage were “very fair”.

“I am following very closely the discussion on loss and damage,” said Georgieva. “It worries me that it seems to be still in a very early stage when we are only 50 days away from COP27 [the next UN climate summit].”

Georgieva said the IMF was in a “desperate push to replenish” its Catastrophic Containment and Relief Trust after the Covid-19 pandemic had “sucked away” the trust’s money.

“The question is how we can pay for institutions like ours to create this funding capacity,” Georgieva said. “When an innocent bystander is hit by exogenous shock, by external shock, we can then step forward and make the debt go away.”