In 1902, William Wentworth-Fitzwilliam, sixth Earl Fitzwilliam, died. He left a legacy worth more than £3bn in today’s money. He had not exactly been poor to start with, but in the late 18th century a large part of the main artery of the South Yorkshire coalfield was found to lie under some 20,000 acres of his land.

Thanks to that coal, says Catherine Bailey in her wonderful book on the family dynasty, Black Diamonds, his wealth had increased 1,000-fold. Lucky man.

He wasn’t the only one. Bailey also tells us of the Duke of Portland, who had an income from his coal mines of £108,000 a year (the equivalent of £9.2mn). His house had an underground ballroom that could hold 2,000 and “a riding school with a gallop a quarter of a mile long, lit by 8,000 jets of gas”.

Obviously, the earls and dukes in question should never have been this rich. Miners’ wages should have been more than £50 a year, even with a couple of tons of coal chucked in. Nonetheless, the quantum here should serve as a reminder of just how valuable intense forms of energy have always been. 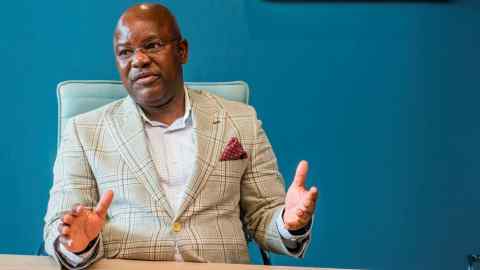 A more modern reminder comes in the form of the share price of the likes of Thungela Resources, a thermal coal company spun off from Anglo American in 2021 in an attempt to get the dirty stuff off the books. If you’d invested then you would have made 1,025 per cent by now. A £10,000 investment would now be worth well over £100,000.

If you have been paying any attention to the energy markets in recent years the story of the riches made by other people in the coal market will irritate you, possibly because you wish you had bought Thungela (or perhaps were a 19th century duke with land in the Midlands) but largely because, like most of us, you would prefer the renewables revolution to be pushing the prices of the likes of thermal coal and oil to nothing, as we smoothly move to net zero.

So the sharp rises in fossil fuel prices — and the implication that there is nothing smooth about the path to net zero — is not welcome.

With that in mind you may have been relieved to see that the world of worry around global recession has finally been slamming commodity prices. Brent crude is 25 per cent or so off its March highs (below $90), US gas prices are down to below $3.90 a gallon from a high of $5 and coal prices are 14 per cent off their highs.

Unfortunately this is very unlikely to last. You will soon, I think, be irritated all over again.

Look at the dynamics of the oil market. The key point to remember, says Robert Mullin at Marathon Resource Advisors, is that for the past 40 or so years, oil prices have had a pretty firm ceiling and no obvious floor. When oil prices rose they were met with a combination of new supply from Opec, which never wants the oil price so high that the west invests too much for itself, plus a little from the west and demand destruction (the cure for high prices was high prices).

That’s just not the case any more. The Opec countries no longer have excess capacity to throw into the mix. At the same time the “increasingly high share of global energy company capex” diverted to green and carbon capture initiatives in the west, alongside the endless investment disincentives created by the talk of price caps, windfall taxes, export bans and an inconsistent regulatory environment means they have a much firmer floor and a vastly diminished ceiling.

Opec no longer needs to create low prices to dissuade the west from overinvesting — we have banned ourselves from doing it with “fossil fuel shaming”. It can now allow prices to stay high with no risk to its long-term revenues. At the same time our collapsed levels of investment have removed any price ceiling.

In the old days if you looked at a chart of oil prices and capex spend you would see them pretty much tracking each other. Oil prices up, capex and future supply up. Look at that same chart today and they do not. Even as the oil price has risen sharply since late 2020, capex has fallen.

The cure for high prices is, for now at least, no longer high prices. The story of 2023 will then be one of dual realisation, says Mullin. We will see that we cannot cancel fossil fuels on the timeline our politicians have promised and that “the potential outcomes for crude oil prices have moved up from their historically downward bias to asymmetrically skewed to the upside”. The structural bull case for fossil fuels, driven by climate change policy, remains entirely intact.

Not everyone sees it quite like this. In the medium term, things may shift back to the old normal a little. The new UK government is suddenly mad for fracking and Liz Truss appears to have something of a “drill baby drill” mindset (no bad thing at the moment). But for now at least you may have an opportunity to buy into oil stocks at very attractive prices — something that makes perfect historical sense.

This won’t be the first time a commodity bull market has offered second chances to those who have been a little slow on the uptake. Look back, say the analysts at Schroders, and you will see that corrections of 15-20 per cent in commodity markets are “completely normal during bull cycles”. There were seven of these in the 1970s and during the commodity bull market of 2001 to 2008 there were five that took prices down more than 10 per cent.

I can’t quite bring myself to suggest you buy stocks that are up 1,000 per cent or more but if you want to buy in there are plenty of good ETFs in the sector. One to look at is the iShares Oil & Gas Exploration and Production UCITS ETF (SPOG). It’s up 50 per cent year to date but off a little over the past few days.

I can’t promise you that the profits will get you an underground ballroom or a house with 1,000 windows. But they might help you make a start.

Merryn Somerset Webb is editor-in-chief of Money Week. The views expressed are personal. She has shares in Shell. merryn@ft.com