Y Combinator’s latest cohort of founders have opinions on the future of fintech. One-fifth of the accelerator’s Summer 2022 batch, which spans 240 companies, is working on solving issues in the financial space. The pitches range from building the Square for micro-merchants in Latin America to creating a way to angel invest in your favorite athlete.

And while the pitches are diverse, some concentrations show key ways that a group of vetted entrepreneurs are thinking about the landscape’s shift in light of finicky venture markets, a downturn, and some public market meltdowns. The most popular problem area among this batch’s fintech cohort has to do with payments, which is unsurprising. The story really begins with which focus made second place: neobanks.

This year’s cohort includes 11 neobanks, a trend we saw start to take off with YC’s W22 cohort that also included 18 such companies. That’s a substantial increase from the 1-2 neobanks per batch that made the cut for YC in both 2020 and 2021, suggesting that the accelerator is doubling down on founders who are aiming to build the next “one-stop-shop” for fintech services.

The neobank founders it has chosen to back this summer tend to have highly specialized knowledge of niche markets, which gives them the potential to capture the entire wallet share of specific populations they know well rather than trying to cultivate a broader but perhaps less deep appeal. Nearly half of the neobanks in this batch are based in the United States, while the remaining are spread across the U.K, Swizerland, India, Nigeria, Senegal and other geographies.

Lagos, Nigeria-based Pivo is focused on freight carriers in Africa, Hostfi is looking to capture the market of short-term rental hosts and Pana says it is targeting the 62 million Latinos living in the U.S., just to name a few examples from the latest batch. The three companies are founded by a Nigerian port operations manager, an Airbnb superhost and a LatAm-focused digital banking exec, respectively, showcasing the deeply focused approach of these founders on more niche segments of the market where they have prior experience.

YC’s concentration of neobanks feels somewhat contrarian to general fintech sentiment these days. There’s been a slew of examples of why neobanks – despite being low-cost, savvy banking solutions – don’t work well: despite mega venture rounds, there are large losses. Strong growth is possible, but often at the cost of more and more operating expenses.

Yet, while some saw sector big losses as the end of neobanks, Chime offers hope. The well-known neobank became EBITDA-positive in late 2020, showing that the cohort can get to a place of economic health and shutting down some critiques. Still, the banking world is an increasingly competitive space, as practically every fintech company fights for consumer wallet share. Neobanks are unlikely to be a winner-takes-all market – rather, more specialized upstarts may be better suited to cater to the specific needs of a given community in a holistic way. And this batch supports that realization.

India has always been Y Combinator’s favorite geography to invest in, outside the United States. Last batch, YC’s India founders appeared concentrated mostly within the financial services sector, around 30% when you consider that out of 36 Indian startups, 11 were in the fintech world. Then it was a contrast from prior showings, in which most of India’s YC startups fell into the B2B services category.

While last year showed a bigger focus on fintech, this year the courses slightly reversed. Out of the 21 startups YC backed in India this cohort, about 40%, or 8 startups, are in the fintech category. Fintech is still a big area of focus, but B2B did take the lead for the geography: 47% of YC’s India startups are focused in the enterprise world this year.

The slight shift away from Indian fintechs is not necessarily indicative of YC caring less about fintech startups globally. The accelerator backed eight fintech bets in Latin America, worth 57% of its total wagers in the region this season. The Latin American fascination with financial technology continues, it appears, perhaps supercharged by the success of high-profile Brazilian neobank Nubank, which went public and officially became Latin America’s most valuable listed bank late last year.

African fintech has a similar story, with five of the accelerator’s eight investments working in the fintech space. There’s Anchor, a remote banking-as-a-service platform that has already raised over $1 million for its platform, Bridgecard, a card issuer for Nigeria, and erad, a non-dilutive funding platform for Middle East startups.

Despite a bit of a slowdown in fintech funding for private companies this year compared to the ultra-hot 2021 market, the sector remains much hotter than it was in years past, accounting for nearly 21% of total venture deals as of Q2 2022. YC follows the same trend, with pre-seed perhaps getting a boon in enthusiasm from the fact that late-stage businesses like Stripe or publicly-traded fintechs, like Robinhood and Affirm don’t feel exactly stable right now.

Here’s a breakdown of the percentage of fintech companies in the accelerator’s past few batches: 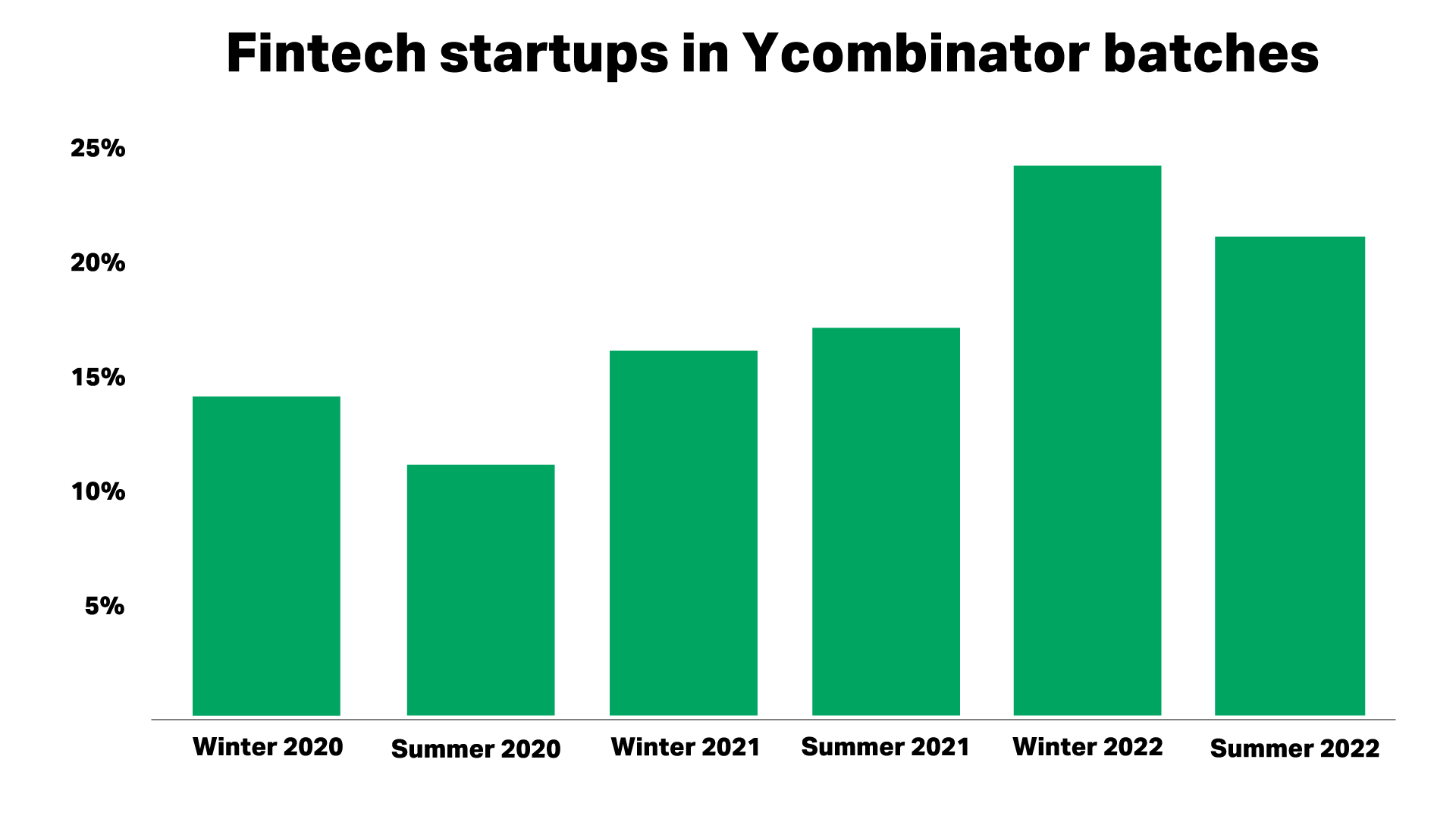 As with any sector, we could see competitive tensions within the accelerator itself start to breed depending on where startups go from here. Crypto startups Eco and Pebble, both YC participants, had a feud earlier this year when Eco’s CEO made allegations against the Pebble founders for “copy-and-pasting” significant parts of his company.

The overall fintech space is a bloodbath right now as the market has become saturated with companies that all play in similar areas trying to fight for the same sets of customers. YC’s startups are no exception – only time will tell if their approach of focusing in on international companies operating in niche markets will pay off or if consolidation in the sector has already gone too far for new upstarts to see breakout success.