Carlyle Group’s ousted chief executive Kewsong Lee asked for a pay package worth up to $300mn over five years and resigned from the US private equity group after its co-founders refused to even discuss the deal, multiple people with knowledge of the matter said.

Lee crafted the deal during negotiations with his consultants and Carlyle this spring ahead of planned talks with the board over a new five-year contract. The share-based pay package was tied to the performance of the private equity group’s stock.

But Carlyle’s billionaire co-founders Bill Conway, David Rubenstein and Daniel D’Aniello, who sit on its board, would not engage in talks on the proposal and did not respond to Lee’s detailed submission, the people said. This left Lee’s leadership in question and ultimately led to the firm’s decision to find a new leader.

Lee’s shock departure on Sunday rocked one of the world’s best-known private equity groups, which manages $376bn in assets. Shares in Carlyle have fallen more than 10 per cent since the news broke, wiping more than $1bn off its market capitalisation.

As recently as Friday, Carlyle had been sending out invitations to a dinner that Lee was due to host in New York in September.

Carlyle’s founders appointed Lee and Glenn Youngkin as co-chief executives, effective at the start of 2018, a move that was intended to show that a younger generation was taking the reins. Lee took sole charge when Youngkin — now the Republican governor of Virginia — stepped down in 2020.

Lee’s pay proposal was designed to bring his remuneration closer in line with peers at KKR and Apollo Global, though it would have lagged its larger rivals, which manage more money and have a higher market capitalisation.

Last year, he earned a total package of $42mn, the vast majority of which was comprised of performance-driven stock awards. Of this, his annual salary was $275,000, plus a cash bonus of $5.5mn.

In order for Lee to earn the full $300mn under the new pay deal, Carlyle’s market capitalisation would have had to roughly double in value, one of the people with knowledge of the details said.

While Lee’s pay request had little precedent in corporate circles, it was modelled on what has become a new standard for the largest publicly traded private equity firms.

It accounted for the fact that Carlyle was smaller than some of its competitors, said people familiar with the details. KKR co-chief executives Joseph Bae and Scott Nuttall were given contracts in December that will in a best-case scenario pay out more than $1bn in stock in a five-year period, according to filings.

Other firms including Apollo Global and TPG have granted top executives multiyear stock awards that could be worth hundreds of millions of dollars if there are big share price rises.

Lee’s proposed contract, which would have paid him hundreds of millions of dollars if Carlyle performed well, also risked expiring with little value if its shares fell. It required Carlyle’s share price to remain high towards the later years of his contract. 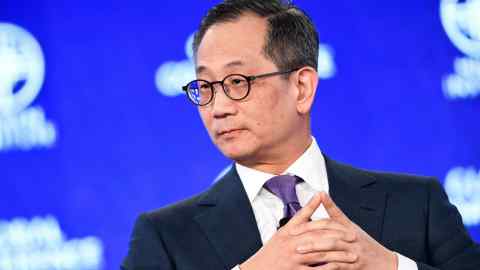 Lee’s lawyers and consultants were directly working with Bruce Larson, Carlyle’s head of human resources, on the proposed contract as Lee’s existing agreement was due to expire at the end of the year.

But talks dragged on and Lee saw the lack of progress as evidence that Carlyle’s septuagenarian founders — who established the firm in 1987 — were resuming a more active role and wanted to pick a new leader, the people familiar with the details said.

On Sunday, Carlyle’s board of directors met and decided to take action, telling Lee his employment agreement would lapse at the end of the year. He tendered his resignation shortly afterwards. Conway has become its interim leader as the group looks for a replacement.