The energy, climate and social spending bill that won critical support in the US Senate this week would raise $14bn by taking aim at a tax break long cherished by America’s wealthiest private equity and hedge fund managers.

“Carried interest” allows profits accrued to investment managers to be taxed at the lower rate rather than ordinary income. The provision in US tax law has long been criticised by progressives and populist conservatives for contributing to soaring income inequality.

The Inflation Reduction Act of 2022, proposed by Senate Democrats and supported by the White House, would extend the holding period of investments eligible for carried interest tax treatment from three years to five years, making it more difficult to claim the lower rate.

Joe Manchin, the West Virginia senator whose support was critical for the legislative deal, suggested he wanted to eliminate the loophole.

“The only thing I was adamant about is the carried interest. Enough is enough for the one-tenth of 1 per cent of the wealthiest people in the country having an advantage,” said Manchin at a press conference.

“I think the people that have benefited from carried interest for years and years and years, knew that they had a good run. It was long overdue to get rid of and you can’t justify it anymore,” he added.

Lobbyists backed by buyout groups have headed off previous efforts to eliminate the tax break. They opposed a 2017 tax law sponsored by Republicans and signed by then-president Donald Trump which extended the holding period for special tax treatment to three years from one.

Industry groups already appear to be bracing for a fight against the Democrats’ proposal.

“Washington should not move forward with a new tax on the private capital that is helping local employers survive and grow,” said Drew Maloney, head of the American Investment Council, the private equity industry’s lobbyist in the US capital.

Bryan Corbett, chief executive of the Managed Funds Association, a trade group whose members include hedge funds, warned the proposal “would punish entrepreneurs in investment partnerships by not affording them the benefit of long-term capital gains treatment”.

Executives at private equity firms typically receive salaries that are modest compared to their entitlements to receive carried interest, which give them a share of the profits on successful investments.

These earnings are taxed at a top marginal long-term capital gains rate of 23.8 per cent, lower than the top ordinary income rate of 37 per cent. The provisions saves tens of millions of dollars in taxes a year for some of Wall Street’s richest managers.

The Senate Democrats’ proposal might hit hedge fund managers harder than those in the buyout industry. Private equity investors typically hold investments for five to seven years, signalling that many deals would continue to be favourably taxed as long-term gains. Hedge fund investors more often hold investments for shorter periods of time.

Morris Pearl, a former BlackRock executive working with the Patriotic Millionaires think-tank, said the proposed change in tax rules would have a minimal effect on most people on Wall Street, calling it not “a big deal”.

To truly close the loophole, the holding period should be extended to 10 years, Victor Fleischer, a tax expert at the University of California, Irvine, said on Twitter. Otherwise, he predicted that private equity executives would find ways to maintain their current tax rates.

Stephen Schwarzman, co-founder of the leading private equity firm Blackstone Group, stood to receive $538mn in carried interest-based pay as of the end of last year, an accounting figure that assumes the firm sold all of its investments at their year-end 2021 values. Blackstone president Jonathan Gray had accrued $423mn in such pay, according to filings.

Blackstone insiders sat on $3.7bn in unrealised carried interest income, a figure that propelled the average pay and benefits per employee at the firm in 2021 beyond $2mn, the Financial Times reported earlier this year. 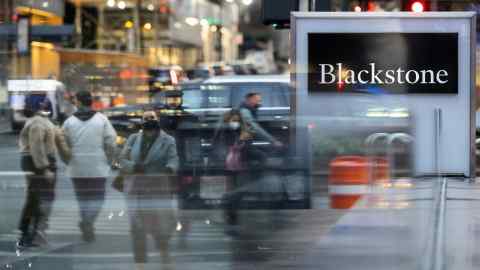 For shareholders in firms such as Blackstone and Carlyle Group that have gone public and become ordinary corporations, the legislation may have a minor effect.

“[O]ur carry is already fully taxed on the corporate side,” Carlyle chief financial officer Curtis Buser said on a conference call on Thursday.

Though Manchin’s support suggests further limits on carried interest, longtime followers of the financial industry are sceptical the provision will disappear.

“The ability for [carried interest] to have nine lives and escape certain legislation is pretty remarkable,” said Josh Lerner, a professor at Harvard Business School. “The ability to collect out of this may be less than meets the eye.”