What can pension savers do in bleak markets?


Financial market conditions appear bleak. Inflation has driven interest rates higher, leading to falling prices in the equity and bond markets. The contrast with a prolonged period of rising prices in both markets is huge.

It’s natural for retirement savers to feel depressed, not just about the present but also about future prospects. And it’s particularly gloomy because the ballast traditionally provided by bonds when equities fall can no longer be taken for granted.

So the big question is: what can you do? I’ll focus on three aspects. What can savers do? What can retirees do? And what can you do to prepare for the inevitable next visitation of adverse conditions?

The first question is the most comforting to answer. Savers should recognise that their assets no longer conform to their planned allocation (whatever it might be). So the first thing is to rebalance back to it. This has the fortunate effect of buying into whatever has fallen furthest, taking advantage of the new lower prices.

In fact, falling markets are, perhaps paradoxically, good for savers. Think of the falling prices as a sale. The amounts you had planned to invest regularly will now buy more units of each asset class than they would at the previous higher prices.

Of course that advantage only holds if falls are temporary. But they usually are. That’s the good news. There’s always the possibility that markets never recover. That’s what author William Bernstein calls “deep risk” — and frankly there’s no satisfactory way to deal with that. It’s little comfort that the whole world will be seriously affected, not just you — but that’s the reality of it.

So let’s assume that the falls are not so much long-term as short-term or medium-term. And short-term falls are not a problem if you don’t panic and sell. The only defence against panic is to think rationally rather than emotionally.

The savers most affected by a medium-term fall are those who are relatively close to having to start cashing out gradually as they approach retirement. And the same problem is even worse for those who are already in retirement and see their pension pot fall in value. So let’s focus on them, and get to the second question I mentioned earlier.

Retirees are particularly vulnerable to what is termed, in the jargon, “sequence of returns risk”. They don’t have the luxury of waiting to allow future high returns make up for current negative returns, because their assets are declining as they make withdrawals to sustain their spending needs, and those future high returns act on a smaller asset base. So a sequence of returns that starts low or negative can’t be balanced by later high returns.

That means it’s essential to have a part of your pension pot that’s relatively immune to falling asset prices. And the only such assets are cash-like assets, or at any rate short-term assets, which decline little as interest rates rise.

I think of this as a “safety pot”, in contrast to the rest of the pot, which is your “growth-seeking pot”. Of course there’s a further problem right now, in that stable-value assets are no protection against high inflation.

The closest equivalent available in the UK are index-linked gilts, for which the interest and maturity payments are adjusted to reflect inflation. But reflecting inflation doesn’t mean matching inflation. In fact for some years the yields on these gilts effectively reflect negative inflation, and it’s not much comfort to get payments that go up and down with inflation, but at a level constantly below inflation. Nevertheless, that’s life. To the extent that you seek safety against inflation, that safety comes at a price. 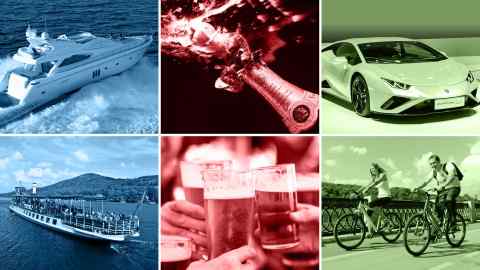 It’s these safety-oriented assets — or, if you don’t hold any, the shortest-term bonds in your portfolio — that offer you the least costly defence against sequence of returns risk.

This leads to the final question. What lessons can you learn for next time?

The answer for those of you who are more than, say, five years from having to withdraw money from your pot is nothing, other than that it’s wise to have a long-term investment plan which you can stick to, such as the now traditional “glide path” that underlies many accumulation plans for retirement.

Why five years? There’s no magic to the number. It’s the period of time when historically markets tend to recover to their inflation-adjusted levels after a fall. And yes, history is not a prediction of the future, but it’s at least a guide.

The answer for retirees and those close to retirement? Build up that safety pot to allow you to gradually withdraw up to five years of spending without touching your growth-oriented pot, if the market takes time to recover from a fall. (I wrote about this strategy in a piece for FT Money a year ago.) And the ultimate defence: be willing to adjust your spending too. Life constantly changes. If we can adjust without too much pain, that’s a big defence against panicky reactions.

Don Ezra, now happily retired, is the former co-chairman of global consulting for Russell Investments worldwide, and author of “Life Two: how to get to and enjoy what used to be called retirement”

FT survey: How are you handling higher inflation?

We are exploring the impact of rising living costs on people around the world and want to hear from readers about what you are doing to combat costs. Tell us via a short survey.

What Will It Cost Elderly Parents To Age In Place At Home?