Advisor Loyalty at Wirehouses and IBDs Challenged in 2022


While overall advisor satisfaction in the employee and independent broker/dealer channels did not change much from last year, wealth management firms continue to struggle with managing advisor attrition, according to J.D. Power’s 2022 U.S. Financial Advisor Satisfaction Study.

The survey of over 3,000 advisors found 15% of wirehouse advisors, 10% of advisors at employee, or captive, firms, and 7% of independent b/d advisors indicated that they either probably or definitely will leave their current firm in the next one to two years. That’s up from 14%, 9%, and 6% in the 2021 study, respectively.

“While it’s not actually attrition—it’s just intention to leave—it’s a pretty good red flag for somebody who’s got a high likelihood to defect,” said Mike Foy, senior director of wealth and lending intelligence at J.D. Power.

In fact, J.D. Power conducted an analysis of past studies to see how many advisors actually turn up at a different broker/dealer three years after indicating an intention to leave; the firm found that more than one-half (52%) of advisors who in 2018 indicated that they either probably or definitely will leave their firm followed through by 2021.

But this year’s study was also an indication that firms need to do more than just keep advisors happy enough not to leave, Foy said.

“It’s not just about reducing regrettable attrition, but we also see big gaps in terms of the number of what we’re calling ‘brand evangelists,’” he said.

These are advisors who not only say they’re not planning to leave their firm, but also that they would actively promote or recommend the brand to colleagues.

“[Firms] need to be creating brand evangelists that can help promote them, attract other experienced advisors who are potential recruits, and just being able to create a brand halo that’s going to attract new advisors, second career advisors into the industry,” Foy said.

Forty-two percent of wirehouse advisors were categorized as “brand evangelists,” compared to 64% of IBD advisors and 57% of advisors across the entire employee channel, including the wires.

Foy said compensation was not necessarily driving advisors to leave their firms, with fewer big brands overhauling their compensation plans in a way that was negative for advisors. Technology and perceptions of leadership and culture were important factors, however.

“As technology becomes more and more important as part of really all aspects of how advisors manage their practices, making the right kinds of investments in technology is important,” he said.

“How do advisors really feel about the culture they’re operating in and the leadership in their firm? Part of the role of leaders is to really foster a really strong culture, but it’s also to communicate effectively, to have a clear strategic direction for the firm. Those are areas where we tend to see low satisfaction firms not doing well.”

“This represents a huge risk as experienced advisors obviously have accumulated significant assets that will very often leave the firm if the advisor departs,” J.D. Power said.,

At the beginning of an advisor’s career, they get a lot of the benefits for being associated with a strong consumer brand, Foy said.

“They get credentialized from a prospective client point of view from the brand; they get training; they get professional development support,” he said. “Over time, as they develop relationships, as they build a book of business, they get to a point where increasingly it’s really their personal brand and personal relationships that are driving referrals and driving growth of their practice. And the relative value that they get from the broker/dealer kind of diminishes over time. And we see that relationship much more strongly happening on the employee side versus the independent side.”

Overall, Edward Jones ranked highest in advisor satisfaction on the employee side, with a sore of 876. That was followed by Stifel, at 872 points, and Raymond James & Associates, at 863. On the independent side, Commonwealth Financial Network took the top spot, at 918, followed by Raymond James Financial Services (842) and Ameriprise (821). 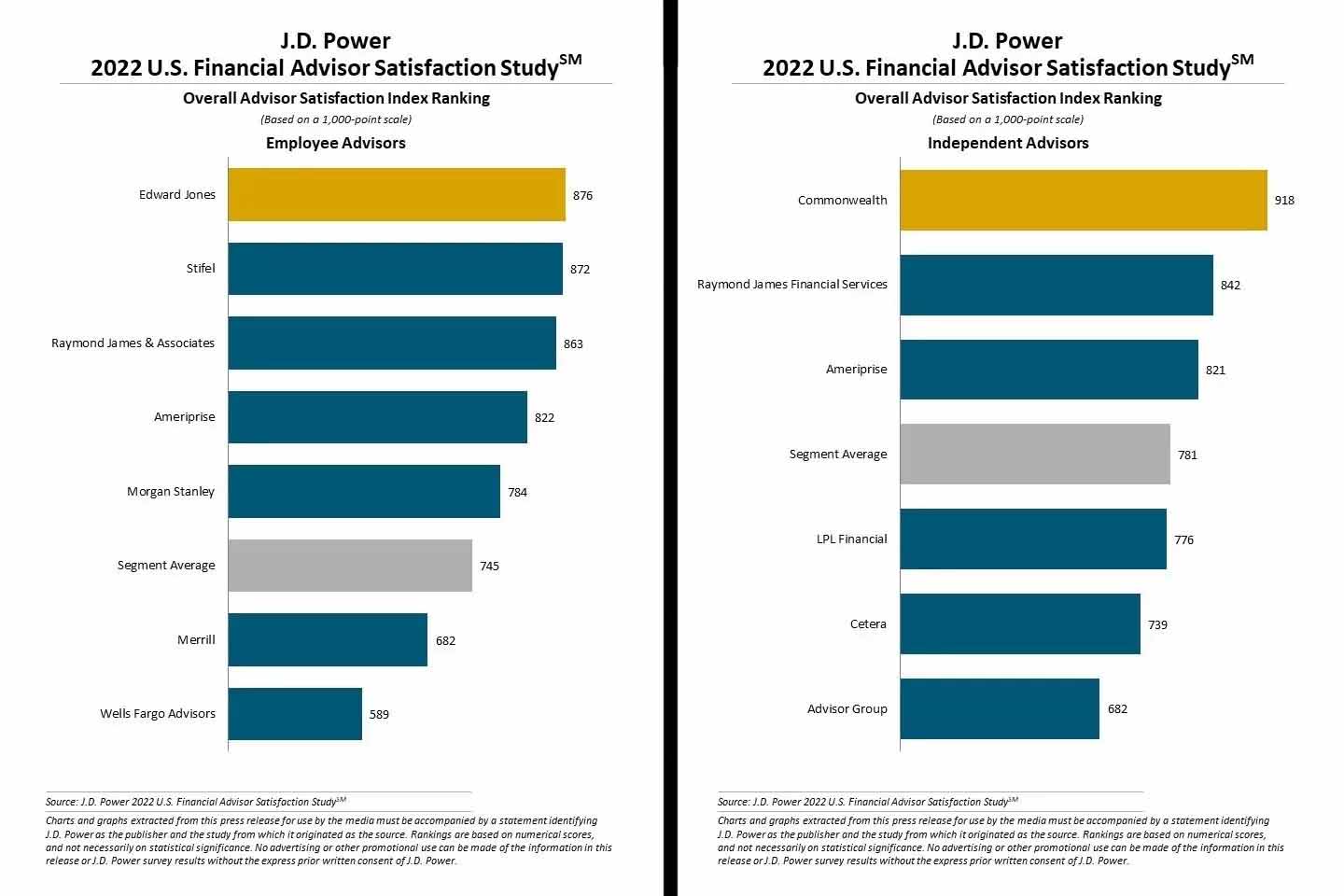 The Fan Who Caught Judge’s Home Run Needs an Accountant