A Church of England investment foundation is tapping bond investors for the first time, seeking to raise £500mn against a shaky credit market backdrop.

The Church Commissioners for England, a charity with £10bn in assets, plans to raise about £250mn in bonds due to mature in 10 to 16 years, with a further £250mn tranche that will mature in 30 years or more, according to an investor presentation. Funds raised will be used by the CCE, which employs 33 in-house investment managers, to support its ongoing activities and investment.

The decision to launch the bond sale comes at a time when corporate bond issuance in Europe is down 16 per cent in the first half of 2022 compared with 2021, according to Refinitiv data, as central banks raise interest rates and inflation reduces real returns on fixed-income assets.

The CCE’s debt-raising plan, dubbed Project Cranmer, is named after the 16th-century Archbishop of Canterbury Thomas Cranmer, who facilitated Henry VIII’s divorce from Catherine of Aragón and helped to lead the English Reformation before Mary I, Henry’s daughter, ordered his execution.

The CCE expects the bonds to be assigned a rating of Aa1 by Moody’s, in a sign of the organisation’s strong credit profile and low risk of default. But investors will have to weigh up a number of unique risks before buying the bonds.

Those include “a threat of, or actual, disestablishment of the Church of England from the State, particularly in the event that such disestablishment were to lead to a dispersal of the Issuers’ assets”, according to the bond prospectus.

The CCE has also met the costs of some claims against bishops related to safeguarding failures for the abuse of children or vulnerable adults in the past. The prospectus warns that claims over “historical failures in relation to safeguarding . . . could in future grow in scale from currently anticipated levels”, adding pressure to the organisation’s finances.

The Church of England declined to comment further on the project. 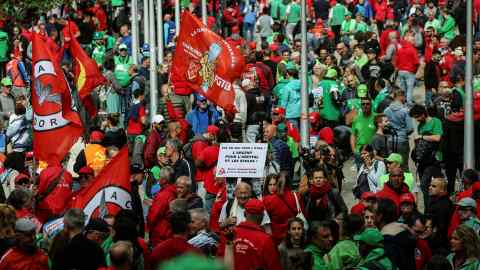 In a roadshow presentation to investors, Gareth Mostyn, chief executive of the CCE, said it had been a “challenging” start to the year in markets, but the investment fund was “only down modestly” by the first quarter, thanks to a high exposure to real assets such as property and land and reduced stock market exposure. This has helped the organisation outperform peers during the current protracted period of scorching inflation, the organisation stated.

“Our slightly lower equity allocation should see us outperform in economic environments such as the one we are currently seeing,” Tom Joy, the CCE’s chief investment officer told investors.

The roadshow presentation also highlighted the bonds’ environmental, social and governance credentials — noting CCE’s history of “investing in a way consistent with Christian values that are closely aligned with ESG best practice”.

FirstFT: Boris Johnson on the brink after cabinet resignations

Why we need to make pensions interesting