Germany’s central bank boss has called for eurozone interest rates to rise in July, warning that policymakers risk acting too late and being forced into a Paul Volcker-style “strong and abrupt” increase in borrowing costs.

Joachim Nagel said in a speech in Eltville on Tuesday that there was “disturbing evidence that the increase in inflation is gaining momentum”. More consumers and companies expect prices to keep rising rapidly, which meant “the risk of acting too late is increasing notably”.

The Bundesbank boss joins several fellow European Central Bank governing council members in calling for it to end net bond purchases at the end of June and raise its deposit rate in July. Inflation is running at almost quadruple the ECB’s 2 per cent target at 7.5 per cent, a record since the single currency was launched in 1999. In Germany prices are rising even faster, up 7.8 per cent, the most since 1981.

Nagel, who took over as president of the Bundesbank in January, said Russia’s “horrific” invasion of Ukraine had “added to the pre-existing price pressures, both directly and indirectly” by driving up the price of energy and other commodities and worsening disruption to global supply chains.

Nagel added that the war “may clearly accelerate pre-existing tendencies in both the short and the long run, as exemplified in energy markets and international trade”. Prominent monetary economists such as Charles Goodhart and Manoj Pradhan have warned that inflation could be kept higher than in recent years owing to structural changes in the economy, such as ageing populations, a retreat from globalisation and a shift away from fossil fuels.

“All this suggests that higher inflation rates will prevail in the near future and that inflation expectations could become less anchored,” he said.

A sanctions-induced recession “could exert a degree of disinflationary pressure,” said Nagel, adding: “Nevertheless, on balance, the inflationary factors of sanctions such as an energy embargo would clearly prevail, at least in the short term.”

“Delaying a monetary policy turnround is a risky strategy,” he said. “It is worth recalling the conditions under which the last, most prominent disinflation episode — the Volcker disinflation at the end of the 1970s — played out,” he said, pointing out that US interest rates rose higher than 20 per cent at that time.

As US Federal Reserve chair, Volcker earned a venerated status among central bankers for his efforts to squeeze out inflation that sent the US economy into a steep recession in the early 1980s. Nagel said the situation in the late 1970s “was different in many respects” because public and private debt ratios were much lower then and inflation had already been high for more than a decade. 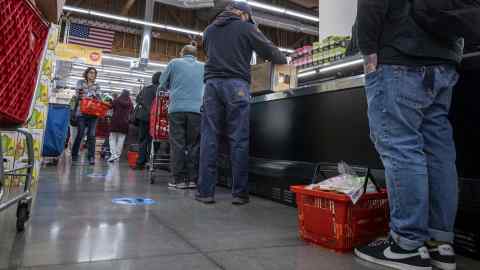 Becoming the first ECB rate-setter to make the comparison between today’s situation and the Volcker era, he added: “There is one lesson I would draw from this: delaying a monetary policy turnround is a risky strategy. The more inflationary pressures spread, the greater the need for a very strong and abrupt interest rate hike.”

He warned such a scenario would “place excessive strain on firms and households”, while creating vulnerabilities in the financial system and prompting heavily indebted governments to push back against rate rises, “putting the independence of central banks at risk”.

Nagel, a former executive at the Bank for International Settlements, worked at the Bundesbank for 17 years before leaving in 2016 and was chosen by Germany’s new government last November to take over from Jens Weidmann who decided to quit after a decade in the job.

French hail ‘breakthrough’ in EU dispute with US over climate law

US economy adds more jobs than expected in November