Apollo Global Management beat profit expectations in its first results since its merger with life insurance company Athene in January, a deal that dramatically transformed the private equity giant into a $32bn financial conglomerate.

In results released on Thursday, Apollo reported a $1.2bn adjusted pre-tax profit, with $670mn earned from its newly acquired Athene operations. It also generated $310mn from the management fees it collects and $187mn from selling investments profitably, including a one-time gain stemming from the merger.

“Our first-quarter results are a milestone event for Apollo following our merger with Athene in January,” said chief executive Marc Rowan in a statement.

The results underscore how Apollo is set to diverge in coming years from its publicly traded peers, as it bets on its rapidly expanding business of managing debt investments on behalf of life insurance and fixed annuity policyholders.

Fifty eight per cent of the New York-based investment group’s adjusted net income was attributed to “spread” earnings, the difference between how much Apollo made investing annuity premiums and what it owed to Athene’s annuity policyholders.

Most private equity firms such as Blackstone and Carlyle Group, in contrast, emphasise their management fees and “carried interest” derived from overseeing large investment funds capitalised by pensions and sovereign wealth funds. Now, just 42 per cent of Apollo’s earnings come from such sources, compared to a majority at rivals.

Founded in 1990 by billionaires Leon Black, Josh Harris and Rowan, Apollo is known as one of the private equity industry’s largest investors with $86bn in assets dedicated to corporate buyouts.

But the firm, which manages $513bn in assets, has made the bet that its expertise deploying insurance float — cash from customer premiums Apollo invests but does not own — into moderate earning but reliable fixed income securities will win the favour of stock market investors.

Rowan helped form Athene over a decade ago to acquire distressed insurance assets for Apollo to manage. Athene, which went public in 2016, also counted Apollo as a minority shareholder. By the time Apollo decided in 2021 to buy all of Athene, it accounted for about two-fifths of the firm’s overall assets.

Most of Athene’s assets are invested in investment-grade rated debts, but much of the spread Apollo earns comes from investing 6.2 per cent of premiums into more complex and illiquid investments. 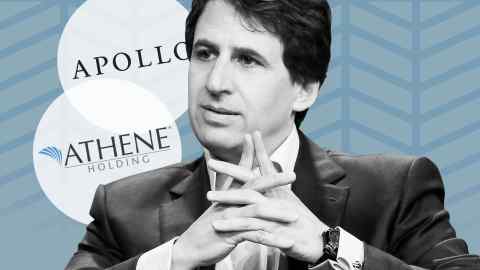 These include being an investor in various Apollo funds, or as an equity investor in structured debts originated by Apollo platforms ranging from small business lending to aircraft leasing.

Apollo’s huge bet on credit investing also comes as the Fed is set to aggressively raise interest rates to fight inflation. Some $37bn, or 20 per cent of Athene’s portfolio, is invested in floating rate debts. Apollo expects to earn as much as $40mn in extra profits for every 25 basis points that rates are increased.

At the Milken Global Conference in Beverly Hills on Monday, Rowan emphasised debt investing as the driver of Apollo’s growth.

“Private equity is not a growth business,” said Rowan, noting that the unit can only be responsibly expanded at a measured pace. He also cautioned that Apollo’s newest buyout fund will take longer than previously forecast to close.

“The yield business is a scale business,” he said. “We can only grow as fast as we can generate assets.”

Inflation and the investment outlook

The (American) age of ETFs