Elaine Kenyon, a 66-year-old carer, was devastated to learn that the £7,000 she shelled out for her and husband Ian’s pre-paid funerals is now at risk.

“I cried and cried when I found out — we’ve worked and saved very hard to pay off our funeral plans so our son won’t be burdened,” she said from her home in Accrington, Lancashire.

“There’s no way we can start again — my husband’s in full-time care with multiple sclerosis and I’m still working as much as I can . . . to try and make ends meet.”

Kenyon is among 46,000 older people left distraught by the financial collapse of Safe Hands, a leading funeral provider.

Experts warn that other companies are also at risk as the Financial Conduct Authority (FCA) prepares to implement a regulatory crackdown on the sector from July.

Following concerns about mis-selling, cold calling and improper funding, the watchdog will require companies selling and managing plans to be FCA-authorised.

The new system will replace the self-regulatory Funeral Planning Authority (FPA), a voluntary body with no power to stop providers from trading. 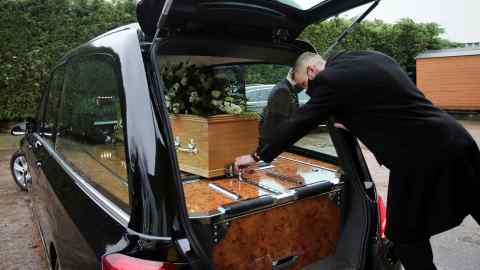 The fear among campaigners, who have long called for statutory regulation, is that not all funeral providers will secure authorisation and may fall into administration.

James Daley, who has campaigned on the issue with the consumer support group Fairer Finance, told FT Money: “A handful of companies were being run fast and loose and some who have got their application in I don’t think will make it over the line.”

He said “the main problem” was funding, with the FCA putting strict capital requirements on the trusts, into which operators must put client money for pre-paid plans. “These have to be 110 per cent funded on the cost of their customers’ funerals, to cover inflation and other risks.”

He added: “Some firms won’t be able to back up their funding claims. They may try to sell their books but who will accept an underfunded trust? It won’t be the big, well-known firms but it may affect perhaps 10,000 more customers — on top of the Safe Hands customers.”

The FCA website this week showed that 42 firms have applied to the FCA for authorisation, six have not applied yet, 14 plan to transfer their business to other providers, and one has completed a transfer. Three have withdrawn their applications. Some 1.7mn people hold prepaid funeral plans.

Daley said the regulation came after concerns over high pressure sales tactics about what the products covered. “When the plan was cashed in, relatives were being asked to pay loads of extra charges. Commission levels were incredibly high — as much as £1,000 on a £4,000 funeral. There was no real oversight as to whether the money was being looked after.”

In 2001, the Regulated Activities Order — an update to the Financial Services and Markets Act which covered a range of financial products — established that funeral providers would not need to be regulated as long as they followed a few rules. In particular, firms had to put client money in a trust, with an independent fund manager and trustees. Daley said: “No one was checking this was happening.”

The three big providers — the Co-op, Dignity and Golden Charter — have all welcomed FCA regulation.

Gordon Swan, communications director of Golden Charter, said: “It was clear for some time that those on the periphery of the funeral planning market were finding alternative routes to potential customers, with the incentives offered to third parties quickly reaching unsustainable levels. Ethical, well-run operators do not have to rely purely on investment growth outstripping rising costs, because they have well-funded trusts and transparent business models.”

Dignity said: “An effective funeral plan should freeze the cost of the services included in the plan at today’s prices.”

The FCA’s new rules will ensure plans — which typically cost £3,000 to £4,000 — are fair value and properly funded. Cold calling and commission payments to intermediaries will be banned.

In the meantime those wanting a plan are urged to wait until July 29 — when customers will be able to get their money back if the provider goes bust and complain to the Financial Ombudsman Service if they are unhappy.

But it comes too late for Kenyon and other customers of Safe Hands, who now have no assurance they will be refunded.

“You don’t want all this worry at my age,” says Kenyon. “The point of these plans is to give peace of mind, but I can’t stop thinking about it all the time. It’s just so horrible.”

Widower Malcolm Housley, 75, from Wolverhampton, spent £1,550 on a Safe Hands plan. The ex-RAF engineer, who has battled through a quadruple heart bypass, said: “I used Safe Hands as I knew it was a member of the FPA, which made it seem safe. I can’t understand how all this money has disappeared.”

Safe Hands’ latest accounts show net assets of just £5,088 for the year to the end of May 2020 — although trust money is held separately, according to the FPA.

Safe Hands’ administrators, FRP Advisory, said customer instalments appear to have been held in a complicated mixture of equities, bonds, cash, real estate and loans. They are investigating whether these investments could be realised for plan holders.

FRP said Safe Hands, based in Wakefield, West Yorkshire, had entered financial difficulty for various reasons, including the pandemic. The administrators’ proposals will be published on the Companies House website within eight weeks of their March 23 appointment, FRP added.

Graeme McAusland, chief executive of the FPA, said: “Safe Hands did meet our criteria when they were first registered with us in 2019 and subsequently re-registered. This assessment was partly based around professional reports received from trust auditors and actuaries, together with information provided by the firm and trustees.”

The FPA will be wound up when the FCA takes over market regulation.