How the UK’s non-dom status works


The UK’s unusual non-dom tax regime has made headlines with revelations that Akshata Murty, wife of Rishi Sunak, the chancellor, has been claiming non-dom status.

As an Indian national resident in the UK, Murty’s ability to claim non-dom status allows her to earn money abroad without paying tax in Britain for up to 15 years.

Murty has confirmed she pays the required £30,000 annual fee to retain these benefits, putting her in a small group of less than 2,000 mostly very rich people who do so, according to the latest statistics.

What is a non-dom?

Non-domiciled people are UK residents deemed to have their permanent home or “domicile” outside the country and so may not need to pay UK tax on foreign income or capital gains.

The exemption dates back to 1799, when income tax was introduced. It was intended to protect colonial investments and allowed UK residents to be taxed only on money brought into the country.

How do you become a non-dom?

Everyone is born with a domicile, the place considered their permanent home. This “domicile of origin” is determined by an individual’s father’s domicile at birth. Remarkably, the mother’s domicile is only considered if a child was born outside marriage.

If a UK resident’s domicile is considered to be abroad, they can be non-domiciled. A non-dom usually has to self-report their non-dom status to HM Revenue & Customs by ticking a box on their tax return. People can choose not to claim their non-dom status in any given year. If so, they will pay UK tax on their worldwide wealth.

Non-dom status can be changed by acquiring a “domicile of choice” in the UK, but tax experts say it is not straightforward. It relies on several factors and cutting ties with your country of origin. Citizenship can play a role but it is not decisive.

What are the tax advantages of being a non-dom?

Also, unlike UK-domiciled individuals liable for inheritance tax of 40 per cent on their worldwide wealth, non-doms have their foreign assets exempt from IHT.

For the first seven years non-doms are UK-based, they can claim their exemptions without a fee. However, someone who has been a non-dom for at least seven of the previous nine tax years must pay a £30,000 charge annually. Once they have been non-doms for at least 12 of the previous 14 tax years, this rises to £60,000. 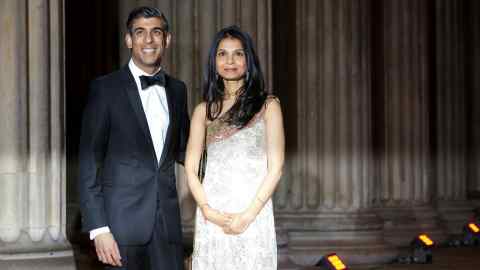 After being resident in the UK for 15 of the previous 20 tax years, non-doms are “deemed” to be UK-domiciled and lose their exemptions.

However Indian nationals such as Murty, who have claimed non-dom status, can have their foreign assets free from UK IHT indefinitely.

This is due to a loophole in the 1956 inheritance tax treaty between UK and India. This declared which country can charge IHT and gives India priority over the UK to tax Indian-domiciled people. India scrapped IHT in 1985 but any non-UK assets held by an Indian-domiciled person remain free of UK IHT. In contrast, a UK-domiciled person pays IHT on worldwide assets. The quirk is one of the “best-kept secrets in tax planning”, one adviser says.

What do we know about the UK’s non-doms?

A study published this week by University of Warwick academics, analysing two decades of non-doms’ tax data, reveals 93 per cent of non-doms in 2018 were foreign born.

Most came from India, the US, western Europe (particularly France) and English-speaking countries such as Australia, Canada, Ireland, New Zealand, and South Africa.

Is the non-dom tax regime due a rethink?

Critics of Murty’s non-dom status have referred to her using a tax avoidance “scheme”. The row has highlighted the wider tax mitigation options available to the wealthy compared with those of modest means — at a time when taxes are soaring to the highest levels since the 1950s.

“Tax is about political choices. The government should end tax loopholes such as non-dom status and make sure that those who have wealth pay their share,” argued Tax Justice UK executive director, Robert Palmer.

But others defend the rules. “This is not a ‘scheme’ or an ‘arrangement’. This is the way we tax non-doms,” said Tom Wallace, head of tax at WTT Consulting. “[Murty’s] doing nothing that lots of people are not doing and she’s doing it within the rules as parliament intended.”

Though the non-dom regime has changed over the past decade, with fees introduced, it can feel old-fashioned. Tobias Ellwood, Conservative chair of the House of Commons defence select committee, said it was “out of date” and “needed to be reviewed”.

The story is not without irony. Dhana Sabanathan, partner at law firm Winckworth Sherwood, said: “It is perhaps fitting that a concept introduced in 1799 to protect colonial interests of the British in India, is now being used by wealthy Indians in the UK.”