Sequoia Capital, one of Silicon Valley’s oldest and most successful venture capital firms, is changing its leadership as the 50-year-old backer of technology industry titans including Apple and Google passes the torch to a third generation of investors.

Roelof Botha, a partner at Sequoia who leads its US and European operations, will assume the firm’s leadership in July, taking over from billionaire investor Doug Leone, who will retire aged 65. The appointment of Botha marks a third transition in Sequoia’s leadership since its founding in 1972 by Don Valentine, a pioneer of the venture capital industry.

The appointment highlighted a delicate balance in Sequoia’s global organisation, between its US and European operations on the one hand and its powerful Chinese arm and emerging Indian funds on the other.

In a letter to Sequoia investors, Leone spelt out limits to Botha’s new role that leave him with little direct control over the Chinese operation. Under Neil Shen, Sequoia China has backed a number of successful start-ups, including ByteDance, Meituan and Pinduoduo, making the global sharing of profits and power in Sequoia a constant source of speculation.

Sequoia has dropped the global managing partner title that had been given to predecessors, with Botha instead becoming Sequoia’s “senior steward”. He would “set the overall tone” for Sequoia, Leone said, as well as being in charge of “centralised functions, including compliance, finance and culture”. An existing arrangement under which Botha oversees US and European funds, and Shen is responsible for China, would continue, he added.

Leone denied that the arrangement would leave his successor with less power, and characterised them as part of a two to three-year transition to a more centralised operating structure that was meant to support a completely decentralised investment approach.

He told the Financial Times that Botha would oversee a new organisational structure including chief finance, compliance, information, legal and operating officers with a global remit, but that investment decisions would be made inside the countries concerned. There would be no change to a profit-sharing system that lets partners benefit from global fund returns in proportion to the contribution made by their region, he added.

“We want to make sure the person who leads isn’t lost to management,” Leone said.

Sequoia has backed many of Silicon Valley’s most successful companies, including Cisco, Apple and Google. In 1996, Valentine turned the leadership of the firm over to Leone and Sir Michael Moritz, who jointly led the Menlo Park, California-based firm until 2012, when Moritz ceded his daily responsibilities due to health issues.

During Leone’s tenure, Sequoia globalised its business and maintained strong returns in an industry where success can be hard to replicate. Its recent successes include home rental platform Airbnb, fintechs Stripe and Square, cyber security specialist Okta and software company Snowflake. 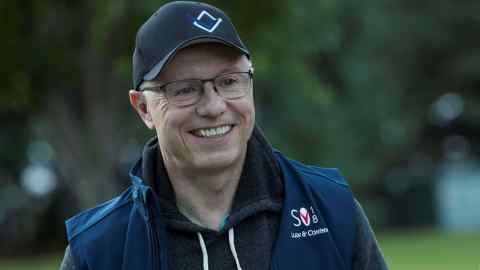 Botha has played a large role in some of Sequoia’s biggest windfalls and its expansion.

A native of South Africa who worked with Elon Musk at PayPal before joining Sequoia in 2003, Botha has been instrumental in building a “permanent” fund structure that he said could grow to as much as $20bn in size. These funds are designed to let it hold on to investments for longer than a typical venture firm, giving it a better chance of sharing in the huge gains that can come as tech companies mature.

Two investments he led — into YouTube and Instagram — were hailed as successful when the companies sold for $1.65bn and $1bn, respectively, although that robbed investors of much bigger gains had they stayed independent. By contrast, another Botha investment, finance company Block, formerly known as Square, soared to a more than $150bn market capitalisation last year, before falling back.

“His keen instinct for innovation has made its mark on our partnership and on our industry,” said Leone in his letter, which emphasised the permanent fund as an initiative “that transformed our business”.

Secondary sanctions: unilateral escalation by US would lack punch

College debt is starting to look like a poor financial gamble